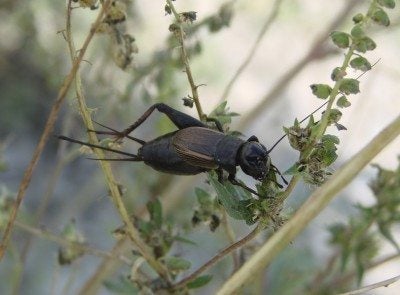 Jiminy Cricket they’re not. Although the chirping of a cricket is music to the ears of some, to others it’s just a nuisance. While none of the cricket varieties bite or carry diseases, they can be extremely destructive to the garden, especially to young plants and flowers. For those of you whose garden is being decimated by crickets — or for those who just can’t get any sleep due to their singing — the question becomes, “How to kill crickets?”.

How to Manage Cricket Pests

Controlling crickets in the garden can be accomplished in a variety of ways, with the most success arising from a combination of cricket control practices. Getting rid of crickets can be accomplished with an application of poison, but let’s consider some non-toxic methods to manage cricket infestations first; we can always fall back to poisons if necessary.

Crickets mate and lay their eggs in the soil in the late summer to early fall, prior to dying from age or freezing temps. The eggs, 150-400 of them, sit over winter and hatch in late spring to early summer with the young being carbon copies of the parent (minus the wings) and feeding on the same food: your plants. In 90 days, the nymphs, as they are called, have matured and it’s time for the cycle to repeat itself.

Crickets mate during nighttime rituals and light is a huge attraction for them. One way to manage cricket pests in the garden is to reduce light. If you have a floodlights, garden or porch lights that beam out upon the garden, you might want to consider turning them off or restricting the length of time they are on. Replace the lights with low pressure sodium vapor lamps or yellow incandescent “buglights,” which are less attractive to insects.

Another method for controlling crickets in the garden is to encourage predators. Cats prey on crickets. Other natural enemies such as lizards, birds and harmless spiders should not be chased away, as they will happily munch on your nemesis, the cricket.

Of course, there is always handpicking, but if you are squeamish, try laying out some baited glue boards sprinkled with cornmeal — “Bon Appétit” to a cricket. A dusting of diatomaceous earth works well indoors and could presumably be used outside for getting rid of crickets. This is a natural abrasive, white powder made of sharp ground up shells that wear through the cricket’s outer shell causing it to dehydrate and die.

Finally, insecticidal baits can be used for controlling crickets in the garden. Baits include such hard to say chemicals as hydramethylnon, metaldehye, carbaryl and propoxur. Sprays are available as well with equally hard to pronounce ingredients but are not recommended for use in the garden. Consult with a garden or pest control specialist to check regarding the safety of any toxins, especially if you are using in an edible food garden.