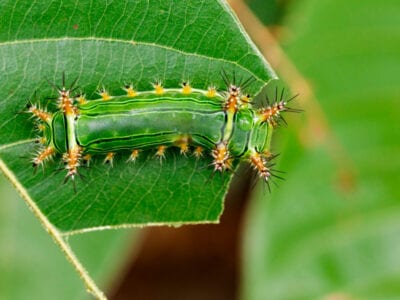 Cup moths are Australian insects that feed on eucalyptus foliage. Voracious feeders, a single cup moth caterpillar can make short work of an entire eucalyptus leaf, and a severe infestation can defoliate a tree. The tree generally recovers unless this happens several years in a row. For people sharing the garden with the mottled cup moth, or related species, it helps to have some cup moth info handy in order to fight off these little buggers.

What are Cup Moths?

The two most common types of cup moths are the mottled cup moth (Doratifera vulnerans) and the painted cup moth (Limacodes longerans).

Cup moths usually produce two generations of offspring per year. The adult moths are brownish in color and emerge from their rounded or cup-shaped cocoons in late winter or summer. They soon set to work mating and laying eggs, and the caterpillars hatch in spring and fall. The caterpillar is the only life stage that causes damage to plants.

The colorful, slug-like caterpillars don’t have legs like other caterpillars, so they glide across the surface of the leaf. The fleshy protuberances on both sides of the body look fearsome, but they are harmless. The danger comes from rosettes of retractable spines at the front and tail end of the body. Cup moth caterpillars can have up to four sets of spines.

For those living in Australia or other areas where the insect is found, gardening with cup moths can be both disconcerting and somewhat unpleasant. Protect yourself with gloves and long sleeves when working around cup moth caterpillars in the garden. Brushing against a caterpillar causes a painful sting, which later turns to intense itching. Though temporary, the effects of the sting are very unpleasant.

All types of cup moths are susceptible to viruses that help keep the insects in check. In addition, they have a number of natural enemies that include parasitic wasps and flies, as well as biting midges. Birds sometimes eat the caterpillars too. Because of these natural controls, treating the insects is often unnecessary.

Insecticides containing carbaryl are also effective, but they kill the natural predators as well as the cup moth caterpillars.