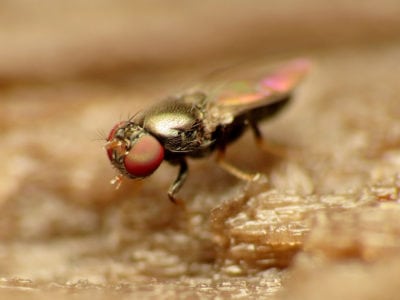 Are Shore Flies and Fungus Gnats the Same?

Both fungus gnats and shore flies thrive in moist conditions that are commonly found in a greenhouse. They are especially prevalent during propagation, plug production, and prior to well-established root systems on plants.

Both fungus gnats and shore flies fall into the order Diptera along with flies, gnats, mosquitoes, and midges. While both are annoying to humans, only fungus gnats actually inflict damage to plants (normally the roots from larvae feeding), so no, they are not the same.

How to Tell Fungus Gnats and Shore Flies Apart

Learning to recognize the differences between shore fly and fungus gnat insects will help the grower develop an effective pest management program.

Fungus gnats (Bradysia) are weak fliers and can often be spotted resting on top of potting soil. They are dark brown to black and resemble mosquitoes. Their larvae are white to translucent slim maggots with black heads.

Sturdier in appearance than fungus gnats, shore flies (Scatella) look like fruit flies with short antennae. They are very strong fliers with dark wings spotted with five, light dots. Their larvae are opaque and lacking a distinct head. Both the larvae and pupae have a pair of breathing tubes on their hind end.

As mentioned, fungus gnats are weak fliers and are more likely to be found resting on top of soil, whereas shore flies will be buzzing around. Shore flies feed on algae and are usually found in areas of standing water or underneath benches.

Shore flies are truly just a nuisance while fungus gnats feed on decaying organic matter, fungi, and algae within soil. When their population goes unchecked, they may damage roots by feeding or tunneling. Usually, this damage is reserved for tender young seedlings and cuttings, although they can damage larger plants. The wounds produced by the feeding larvae leave the plant open to fungal disease, specifically root rot fungi.

Remove any infested growing media and plant debris. Do not overwater plants which cause them to grow algae. Excess fertilizer also promotes algae growth. If the pests are a severe problem, replace the potting media you are using with one that has less organic matter.

There are several pesticides available for the control of shore flies and fungus gnat pests. Consult with your local extension agency for information on chemical controls. Bacillus thuringiensis israelensis may also be used to control fungal gnats.