What Are Kissing Bugs: Learn About Conenose Insects And Their Control 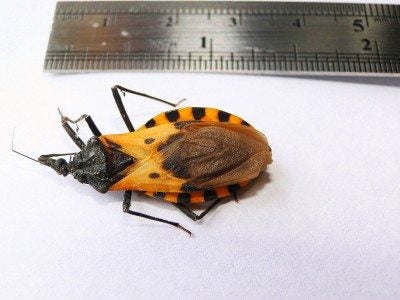 Kissing bugs feed like mosquitoes: by sucking blood from humans and warm-blooded animals. People don’t normally feel the bite, but the results can be devastating. Kissing bugs cause serious harm by spreading disease to humans and animals. They can also cause deadly allergic reactions. Let’s find out more about identifying and eliminating kissing bugs.

What are Kissing Bugs?

Kissing bugs (Triatoma spp.), also called conenose insects, are easy to recognize by the 12 orange spots around the edges of their bodies. They have a distinctive, cone-shaped head with two antennae and a pear-shaped body.

These insects feed on the blood of warm-blooded animals. They don’t inject the disease organism when they suck blood but, instead, excrete it in their feces instead. Humans (and other animals) infect themselves when they scratch the itchy bite. Kissing bugs tend to suck blood from moist, tender areas of the face.

Where Can Kissing Bugs be Found?

In the U.S., kissing bugs are found from Pennsylvania south to Florida, and from Florida, westward to California. In Central America and northern parts of South America, they spread a dangerous disease called Chagas disease, which is spread by the protozoa Trypanosoma cruzi.

Although T. cruzi is also found in kissing bugs in the U.S., the disease doesn’t spread as easily because of the difference in climate and our tendency toward eliminating kissing bugs from our homes before they become a serious problem, which lessens the amount of contact. As global warming raises temperatures, the disease may take hold in the U.S. It has already become a problem among dogs in south Texas, and there are a few reported cases of the disease in Texas.

Kissing bugs come into homes through open doors and windows. They are attracted by light in and around dwellings. The insects hide during the day and come out to feed after sunset. Indoors, kissing bugs hide in cracks in walls and ceilings and other secluded areas. They also hide in pet bedding. Outdoors, they spend their days under leaves and stones and in wildlife nests.

So how does one eliminate kissing bugs? The first step in controlling kissing bugs is to remove infested pet bedding and check the attic for mice, rats, raccoons and squirrels. These animals must be removed, and their nests cleaned up to completely control the insects.

Kissing bugs respond well to insecticides. Choose a product labeled for use against Triatoma. The most effective insecticides are those that contain cyfluthrin, permethrin, bifenthrin, or esfenvalerate.

Prevent reinfestation by frequently vacuuming and sealing up hiding places and entry points. Cover windows and doors with fine mesh screens, and seal up any other cracks or openings that lead to the outside.