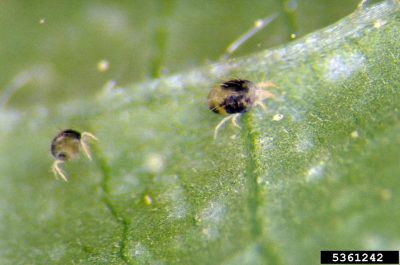 If your plants are attacked by two-spotted mites, you are going to want to take some action to protect them. What are two-spotted spider mites? They are mites with the scientific name of Tetranychus urticae that infest hundreds of different plant species. For more information about two-spotted mite damage and control of two-spotted mites, read on.

What are Two-Spotted Spider Mites?

You may have heard of spider mites, but perhaps not this particular kind. So exactly what are they? These garden pests are as tiny as mites can be. In fact, one alone is barely visible to the naked eye, so you aren’t going to be able to inspect it and count its spots.

Finding one mite alone is not very likely. By the time you see two-spotted mite damage and think about two-spotted spider mite control, you are likely to have a large mite population. These mites live on the underside of plant leaves.

As you prepare to fight two-spotted spider mite damage, it helps to understand the pest’s life cycle. Here is a summary of what happens.

The mature female two-spotted spider mites overwinter on host plants. They pass the winter either under the host plant’s bark or else on the base of neighbor plants. In spring, the females mate. They lay two to six eggs a day on the bottom side of the host plants’ leaves, laying perhaps 100 in their short lifetime. In less than a week, the eggs hatch. The new mites lose their exoskeletons three times in their first few weeks. They then become mature adult mites, mate, and lay eggs.

If you see two-spotted spider mite damage on your plants, they probably have mites in all stages of development. Generations tend to overlap. In hot dry weather, the infestations are particularly severe, and control of two-spotted mites becomes important.

You might find two-spotted spider mite damage on either deciduous or evergreen trees or garden ornamentals. Even garden veggies can be at risk. Two-spotted mites suck essential plant fluids from the leaves. With a serious infestation, the foliage yellows or appears mottled. You will likely see fine, silken threads over the leaf surface.

Even with heavy infestations, you may not be able to spot the actual mites on your plants. To confirm your suspicions, hold a piece of white paper under a stippled leave and tap it. Tiny, moving spots on the paper means you need to think about treating for two-spotted mites.

Apply the miticide for control of two-spotted mites every seven days or so. Since mites can develop resistance to chemicals, switch to another type of miticide after three applications.