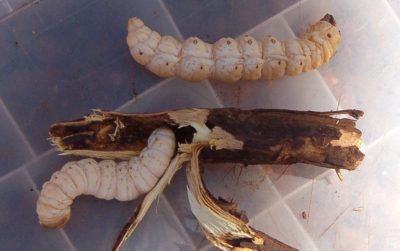 Inside the roots of plants in the Acacia family, fat white grubs can be harvested that are called witchetty grubs. What are witchetty grubs? Read on for some interesting witchetty grub information and some thoughts on how to prevent their injurious activity in your plants.

What are Witchetty Grubs?

These are the larvae of a large wood moth native to Australia. The grubs can cause diminished vigor or even death with their feeding behavior. Witchetty grub control information is spotty, as the larvae is also a common and important food source. However, the adult insect can be prevented from laying eggs that turn into these damaging, yet delicious, grubs.

Witchetty grubs are called witjuri by the indigenous people of Australia. They are an important staple of bushtucker, the wild menu of the region. Traditionally, the grubs are eaten raw and pack a powerful nutrient punch. They are also sometimes roasted on sticks or skewers until the outside is crisp. It is said the roasted grubs taste like a cross between chicken and prawns. The flesh will firm up with cooking, but the inside retains a soft texture much like an uncooked egg yolk.

The women of the area are the usual hunters and will use large sticks to dig into the soil and around host plant roots. Grubs are primarily available from November to January, a time of feasting and enjoyment of this protein packed trail snack.

While witchetty grubs are a food source in Aboriginal regions and are even popping up in restaurants that serve native food, their appearance is rather gross to those of us that don’t feel like eating them. The grubs are huge, fat, colored a pale, fleshy tan, and destroy the root systems of the plants upon which they feed. How do witchetty grubs harm plants? In the hatching season, a large population of these larvae can do some serious damage to the roots of their host plants, causing reduced vigor or, in some cases, death. Control of the larvae is necessary if you have large groups of witchetty grubs in gardens.

Witchetty grubs can grow several inches (8 cm.) long and are fatter than a large man’s thumb. While their girth makes for a nice sized snack, they are also prolific feeders. These children of wood moths hatch inside the host plant and begin feeding voraciously immediately. Their parents, moths called Endoxyla leuchomochla, actually have no feeding organs and will live for just a few days off the fat they stored as larvae.

Their primary purpose is to breed and lay eggs. One of their favorite host plants is the gum tree, but several other species of plants can also be targets. Females can lay up to 20,000 eggs before dying. Once these hatch, the larvae lower themselves down to the plant roots with silken threads and begin to devour root material. As they get larger, they will tunnel in the wood of the plant, causing further damage.

In areas with native plantings, such as Eucalyps and Acacia species, witchetty worms in gardens may be a problem. If you notice the large wood moths fluttering about in midsummer, there is a good chance they are laying their egg masses on your trees.

Catching the adults is one way to prevent egg laying and subsequent larvae. These are huge moths, so the standard sticky traps are not going to be effective. Tempt the moths into an insect zapper for a permanent solution. Another thought is to use netting around the tree to keep them from landing and laying eggs.

Controlling the grubs may be done with insecticides. Any formula created to combat root eating insects should be effective. Prepare using the manufacturer’s instructions and water it in well so the chemical can get to the roots.