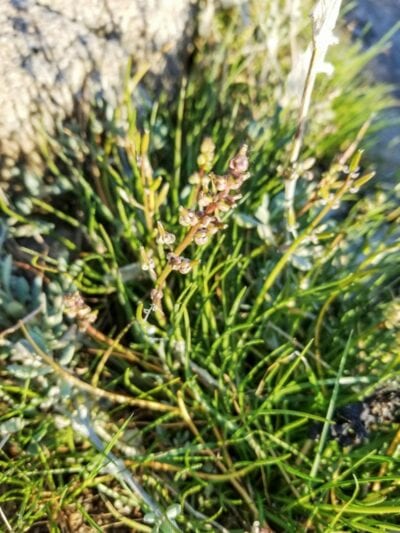 What is arrowgrass? Also known as common arrowgrass, shore arrowgrass, goose grass, pod grass, or seaside arrowgrass it is an aquatic or semi-aquatic plant that grows wild across much of southern Canada and the Northern U.S. It is also found in South America, Europe, and parts of Asia. Read on to learn about identifying along with tips on seaside arrowgrass management.

Seaside arrowgrass is found in wet, alkaline soil including sandy beaches, tidal marshes, swamps, and bogs. It is also found in damp grasslands or irrigated pastures where grass is typically cut for hay. Unfortunately, seaside arrowgrass can be toxic to livestock.

A grassy plant with wand like blades, seaside arrowgrass emerges in early spring. At maturity the plant is generally between 8 and 30 inches (20-76 cm.) tall. Spikes of small green or purplish flowers rise above the plant in mid to late summer.  It spreads by both rhizomes and seeds and may be annual or perennial.

Seaside arrowgrass can produce cyanide and all parts of the plant are toxic. Ingestion of the grass primarily affects ruminants like sheep and cattle. Even small amounts can be deadly when mixed into hay, especially in young animals. The plant is particularly dangerous when wilted and somewhat less dangerous when the plant is dried.

Symptoms include rapid heart rate, severe difficulty breathing, salivation, staggering, muscular twitching, coma, and death and blood turns bright, cherry red. In some cases, the plant can cause sudden death with no warning.

The USDA advises that livestock should be kept away from areas where growth of seaside arrowgrass has been delayed. The plant is most toxic when growth is stunted by frost, drought, or regrowth after harvest.

You may be able to control common arrowgrass with metsulfuron, which is used for broadleaf weeds and some annual grasses. When used as directed metsulfuron has a low toxicity to birds, bees, fish, and earthworms. Toxicity to mammals, including humans, is low unless the metsulfuron is ingested in large quantities. Keep people and pets out of treated areas until the substance has dried.