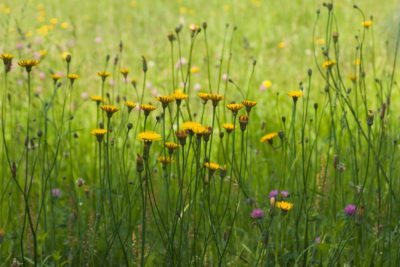 Cat’s ear (Hypochaeris radicata) is a common flowering weed that is often mistaken for a dandelion. Most often appearing in disturbed areas, it will also appear in lawns. While it’s not especially bad to have around, most people treat it as a weed and prefer to get rid of it. Keep reading to learn more about recognizing cat’s ear flowers and controlling the plant in lawns and gardens.

What is a cat’s ear plant? As suggested by their other name, false dandelion, cat’s ears are very similar in appearance to dandelions. Both have low rosettes that put up long stems with yellow flowers that give way to white, puffy, wind-borne seed heads.

Cat’s ears do have their own distinct look though. While dandelions have hollow, unforked stems, cat’s ear plants have solid, forked stems. Cat’s ear flowers are native to Eurasia and Northern Africa, although they have since become naturalized in Oceania, the eastern half of North America, and the Pacific Northwest of the U.S.

Is Cat’s Ear a Weed?

The cat’s ear plant is considered a noxious weed in pastures and lawns. While it is not toxic, it can be known to crowd out vegetation that is more nutritious and better for grazing. It tends to grow best in sandy or gravelly soil and in disturbed areas, but it will also pop up in lawns, pastures, and golf courses.

Getting rid of cat’s ear flowers can be difficult. The plant has a deep tap root that has to be removed completely to prevent it from coming back, much like dandelions. To remove cat’s ear plants by hand, dig down a few inches (8 cm.) below this root with a shovel and lift the entire plant out.

The plants can also be effectively killed with applied herbicides. Both pre-emergent and post-emergent herbicides can be used.