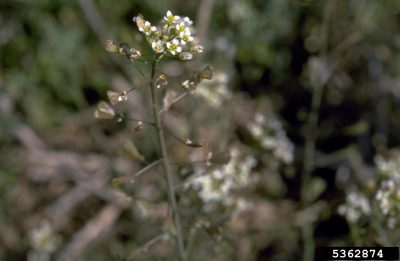 Shepherd’s purse weeds are among the most plentiful prolific weeds in the world. No matter where you live, you won’t have to travel far from your door to find this plant. Find out about controlling shepherd’s purse in this article.

Shepherd’s purse gets its name from the resemblance of its seed pods to purses once carried by shepherds in Europe and Asia Minor. When the heart-shaped pods burst open, they release seeds that are carried by the elements and on the coats and feathers of animals to far-flung areas. The seeds remain viable for a long time, and they germinate easily once they come in contact with soil. One of the challenges of shepherd’s purse control is dealing with a new crop that germinates from seeds each fall.

A member of the mustard family, shepherd’s purse is an edible plant that adds a peppery flavor to salads and stir-fries, and it is an important part of Chinese cuisine. Even so, it’s not a good idea to plant or cultivate shepherd’s purse. It is very difficult to eliminate from an area, and it will infest surrounding areas as well.

Shepherd’s purse weeds have an unusual way of obtaining nutrients when they live in nutrient-poor areas. Moistened seeds release a substance that entraps and digests insects. As the insect breaks down, it provides nutrients that feed the seedling. So is it a carnivorous plant? Although it’s hard to see the difference, scientists prefer to call it a protocarnivore.

When shepherd’s purse seeds germinate in fall, the plant forms a little rosette of leaves that remains flat on the ground. In late winter or spring, the plant sends up a flower stem that will hold several small, pale pink flowers. They can bloom again later in the year when conditions are favorable.

How to Get Rid of Shepherd’s Purse

When you find shepherd’s purse in your garden, the best way to control it is to pull it up. The herbicides and cultivation techniques used to control it can also kill desirable garden plants. Frequent mowing doesn’t help with the control of this weed because it grows so close to the ground.

In lawns or open areas, you can use post-emergent herbicides. These herbicides kill weeds after the seeds germinate and the plant begins to grow. Look for a post-emergent labeled for use against shepherd’s purse. You’ll get good results from an herbicide that contains 2, 4-D and MCCP. Follow the package instructions carefully. Success depends on paying close attention to the conditions favorable for spraying.