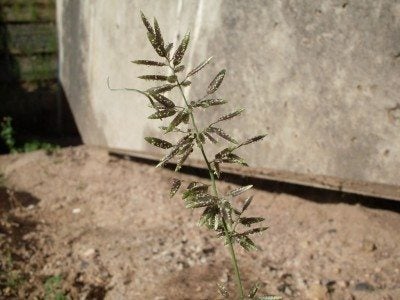 Even though you think about your garden and landscape all year long, you’re probably never as busy working in it as you are in the summer. After all, summer is when pests and weeds rear their ugly heads. Stinkgrass weeds are among the annual grasses that plague and pester lawn care gurus and vegetable gardeners alike during these warm days. Read on to find out more about this plant and controlling stinkgrass weed.

Stinkgrass (Eragrostis cilianensis) is a common annual grass that goes by many names, including strong-scented lovegrass and candy-grass. Its most common name, though, comes from the strong smell this grass produces from special glands located along the mature grass blades. These grasses are highly successful weeds because of their ability to produce an enormous number of seeds from a single plant.

They prefer disturbed areas and will pop up in gardens, orchards and yards readily, especially if these areas were tilled well the previous spring. Fortunately, the mature plants don’t put up much of a fight, instead leaving their seeds behind to continue the war. Stinkgrass control is possible, however, with persistence.

How to Get Rid of Stinkgrass

Stinkgrass in the lawn is an easy customer to remove; simple lawn maintenance will eventually starve the plant out. Stinkgrass weeds that are kept cut close to the ground are unable to produce a seed head, so once the seed supply from previous years is spent, no new plants can develop. Mow your lawn at least once every two weeks to keep the stinkgrass from reproducing and make sure to remove any sudden growth between mowings. It’s a slow kill, but regular mowing is the safest method of stinkgrass control for lawns.

In your garden, stinkgrass can be more difficult since mowing is rarely an option. Pull the weeds by hand at least once a week– like with lawns, the key is preventing additional seed formation. If you use a pre-emergence herbicide in the garden, this is often enough to prevent any new seeds from developing into plants.

More difficult to reach areas or perennial landscapes may benefit from the use of an herbicide when stinkgrass makes its appearance, but be careful not to spray wanted plants.