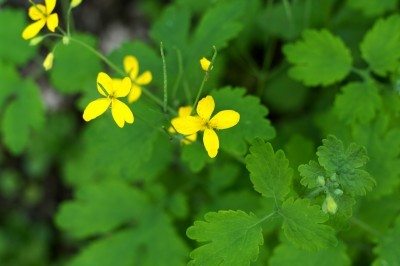 Where does greater celandine grow? Greater celandine is a non-native wildflower that was introduced by early settlers into New England, primarily for its medicinal qualities. However, this aggressive plant has naturalized and now grows across most of the United States – especially the southeastern states. It thrives in rich, moist soil and is often seen growing in damp meadows and disturbed areas, such as along roadsides and fences.

Greater celandine plant info wouldn’t be complete without mentioning its close resemblance to another plant, the celandine poppy.

Before considering the characteristics of greater celandine in gardens, it’s important to learn the differences between greater celandine and celandine poppy (Stylophorum diphyllum), a native plant also known as wood poppy. The two plants are similar, and it can be difficult to know which is which because both have bright yellow, four-petaled flowers that bloom in late spring. However, they have distinct differences.

Celandine poppy is native to the United States. It is well-behaved and easy to grow. Greater celandine in gardens, on the other hand, is another story altogether.

If you’re thinking about growing greater celandine in gardens, think twice. This plant is extremely invasive and may soon crowd out other less rambunctious plants. Even growing the plant in a container isn’t a solution because greater celandine produces great numbers of seeds, which are dispersed by ants and germinate easily.

In short, it’s extremely difficult – if not impossible – to prevent this plant from spreading to unwanted places unless you confine the plant to a greenhouse. Also, it’s important to keep in mind that the entire plant is toxic, especially the roots.