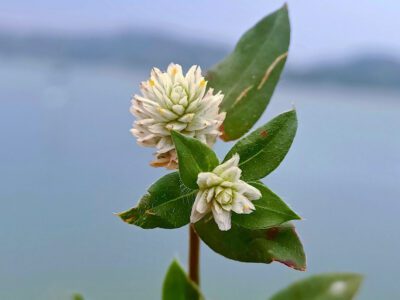 Alligatorweed (Alternanthera philoxeroides), also spelled alligator weed, hails from South America but has been widely spread to the warmer regions of the United States. The plant tends to grow in or near water but can also grow on dry land. It is very adaptable and invasive. Getting rid of alligatorweed is the responsibility of any riparian or waterway manager. It is an ecological, economic, and biological threat. Bone up on your alligatorweed facts and learn how to kill alligatorweed. The first step is correct alligatorweed identification.

Alligatorweed displaces native vegetation and makes fishing difficult. It also clogs waterways and drainage systems. In irrigation situations, it reduces uptake and flow of water. Alligatorweed also provides a breeding ground for mosquitoes. For all these reasons and more, alligatorweed removal is an important conservation effort.

Alligatorweed can form dense mats. The leaves may vary in shape but are generally 3 to 5 inches (8-13 cm.) long and pointed. Foliage is opposite, simple and smooth. Stems are green, pink, or red, herbaceous, erect to trailing, and hollow. A small white flower is produced on a spike and resembles clover blooms with a papery appearance.

An important tidbit of alligatorweed facts regards its ability to establish from broken bits of stem. Any part which touches ground will root. Even a single piece of stem that was split away upstream can root much later downstream. The plant is very invasive in this way.

There are a few biological controls that seem to have some effectiveness in controlling the weed.

How to Kill Alligatorweed

The best time to treat for alligatorweed is when water temperatures are 60 degrees F. (15 C.).

The two most common herbicides listed for control of the weeds are aquatic glyphosate and 2, 4-D. These require a surfactant to help in adherence.

The average mixture is 1 gallon to every 50 gallons of water. This produces browning and signs of decay in ten days. The best results come from treating the weed in the early stages of growth. Older, thicker mats will require treatment at least twice in the year.

Once the plant is dead, it is safe to pull it or just leave it to compost into the area. Getting rid of alligatorweed may require several attempts, but this national weed poses threats to native flora and fauna and a challenge to boaters, swimmers, and farmers.