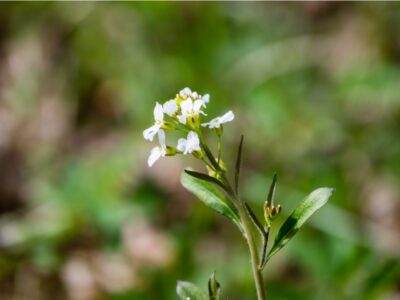 Small-flowered bittercress, also known as sand bittercress, is a plant native to North America. A member of the Mustard family, Cardamine parviflora can be found throughout most of the eastern United States and is rapidly increasing its range— making this bittercress weed potentially invasive.

Cardamine parviflora may be confused with similar looking plants such as C. pensylvanica (Pennsylvania Bittercress) and C. hirsuta (Hairy Bittercress).

Small-flowered bittercress is an erect bittercress weed variety with elongated clusters of stalked flowers borne upon branching stems. The tiny flowers bloom from March to May and are followed by small, slender pods.

The blooms of sand bittercress are about one-eighth inch (3 mm.) across with four rounded white petals accented with six pale yellow stamens. The four sepals are green or a light purple, oblong, and half as long as the petals.

Sand bittercress is a petite bittercress weed, about 8 inches (20 cm.) tall with small basal and stem leaves under 1 to 1.5 inches (2.5-4 cm.) in length. The plant may have a few branches at its base or be branchless.

Sand bittercress is pinnately divided into four pairs of narrow leaflets and a single terminal leaf. Terminal leaves are narrow, not rounded.

Small-flowered bittercress prefers full sun to light shade with either moist to dry conditions. It adapts to many types of soil.