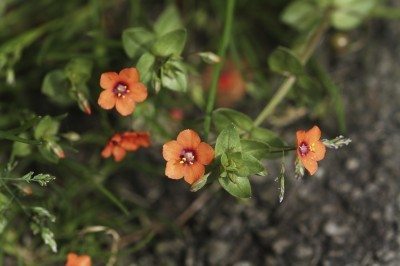 The British sometimes refer to scarlet pimpernel as the poor man’s weather-glass because the flowers close when the sky is overcast, but there is nothing quaint about the plant’s invasive potential. Find out about scarlet pimpernel control in this article.

Scarlet pimpernel (Anagallis arvensis) is an annual weed that is quick to invade cultivated areas such as lawns, gardens, and agricultural lands.

Scarlet pimpernel looks a lot like chickweed, with small, oval leaves growing opposite of each other on plants that grow no more than 1 foot (31 cm.) tall. The two main differences between the weeds are found in the stems and the flowers. The stems are round on chickweed plants and square on scarlet pimpernel. The one-quarter inch (5 mm.) scarlet pimpernel flowers can be red, white, or even blue, but they are usually bright salmon in color. Each star-shaped flower has five petals.

The stems and foliage contain a sap that can irritate the skin or cause a rash. When managing scarlet pimpernel by pulling up the plants, be sure to wear gloves to protect your hands. The plants are poisonous if eaten for both humans and animals. The leaves are quite bitter, so most animals tend to avoid them.

There are no chemicals recommended for the control of scarlet pimpernel, so we have to rely on mechanical methods to keep the plants in check.

Solarization works well on weeds growing in large areas. You can solarize the soil by laying clear plastic over the problem area. Use rocks or bricks to hold the sides of the plastic tight against the ground. The sun’s rays heat the soil beneath the plastic, and the trapped heat kills any plants, seeds, and bulbs in the top 6 inches (15 cm.) of soil. The plastic has to remain tightly in place for at least six weeks to completely kill the weeds.