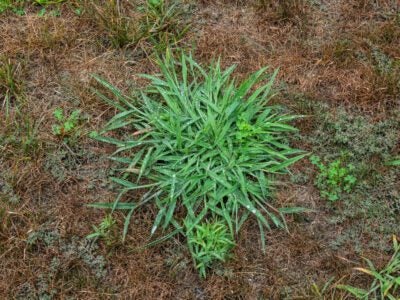 Broadleaf signalgrass (Brachiaria platyphylla – syn. Urochloa platyphylla) is a warm season weed that shows up in ditches, disturbed areas, and fields. It has an appearance similar to large crabgrass, but is actually a separate species that is nearly as invasive. Signalgrass weeds are such a problem in crop areas that their presence can reduce corn yields by 25 percent.

Getting rid of signalgrass plants in such situations increases economic profit, but it is important in the home landscape as well. This is because broadleaf signalgrass flower spikes have two to six seed-filled spikelets and spread quickly.

Signalgrass has wide, flat leaves with fine hairs along the stems and ligules. The leaves are hairless, unlike crabgrass, and usually prostrate but may occasionally get 3 feet (1 m.) tall. The blades are rolled with a tiny bit of hair on the nodes, which can root and spread vegetatively.

The seed heads form from July to September and have two to six seed coated spikelets. These produce numerous seeds which anchor and sprout readily. Signalgrass control can be achieved with constant tilling but the less than vigilant gardener will find heavy patches springing up in un-worked soil.

Signalgrass weeds fail to establish as seedlings if consistently tilled into the soil, but in well-established stands herbicide control is necessary. The weed has been shown to reduce corn production significantly, which means it is of absolute necessity in crop situations to know how and what kills signalgrass.

Almost all grass weeds have a rapid establishment and spread rate. The seed heads that flare from the base foliage bear easily dispersed seeds that attach to animals and pant legs, cling to machinery, and blow in dry winds to favorable ground. One patch of signalgrass weed can spread across the landscape in a season with no intervention. The widespread root system can be difficult to control, too, so for best effects, dig out larger plants rather than hand pulling.

Getting rid of signalgrass may require a two part process. For the organic gardener, hand pulling is the required method. Consistent tilling will also work in minor infestations.

For herbicide application, timing is everything. Use the appropriate herbicide early in the spring season before the plants have fully matured. It is important to catch them before they have formed seed heads or rooted at the internodes. Post-emergent herbicides are suggested and should be applied at the manufacturer’s recommended rate.

Fields and unmanaged areas that have run roughshod with the weed will need a two prong attack. Use a pre-emergent herbicide in early spring to kill seedling weeds and then follow up with a post-emergent herbicide that is systemic.