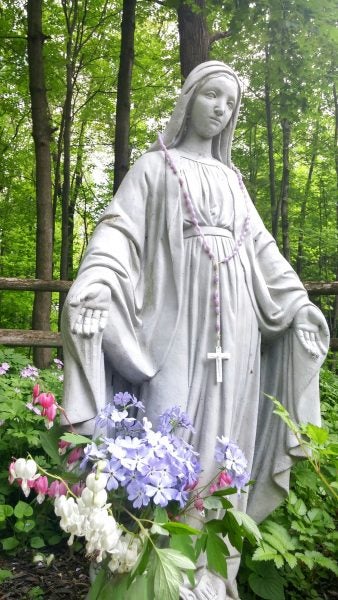 What is a Virgin Mary Garden?

If you haven’t heard of a Mary-themed garden, you might ask what it is. The tradition of naming flowers after the Virgin Mary began centuries ago. For example, during the Middle Ages missionaries in Europe began to unite plants named after Mary in “Mary Gardens.” Later, gardeners in America picked up the tradition.

Creating a Mary Garden of your own isn’t difficult. If you want to know how to create a Mary Garden, here are some ideas to help get you started.

When creating a Mary garden, it isn’t necessary to dedicate a large space to it. Even a small corner will do nicely. You may, however, have a hard time selecting among the many wonderful plants associated with Mary and the saints. In fact, there are so many that it would be impossible to list them all here, much less include them all in your garden.

Generally, the plants represent some aspect of Mary’s clothing, home, or person. Some symbolize aspects of spiritual life. For example, according to legend, the Angel Gabriel was holding a lily when he told Mary that she was to be the mother of Jesus, thus the flowers signify purity and grace. Roses also symbolize Mary as the Queen of Heaven.

Other legends about Mary provide additional floral associations. It is said that as Mary cried at the foot of the cross, her tears turned to flowers called Mary’s Tears, or Lily of the Valley. Mary garden flowers may also include those that use the name “Mary” or some version of it in their common names or meaning. The following plants would be examples of this and appropriate for inclusion in this garden (you may even have many of them growing already):