Where Do Pot Worms Come From – Compost Garden Soil Has Worms 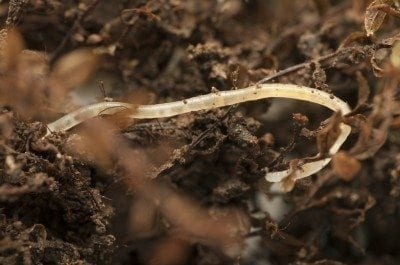 If you’ve added materials that change the pH balance in your compost pile or if rain showers have made it much wetter than usual, you might notice a large collection of white, small, thread-like worms working their way through the heap. These are not baby red wigglers as you might think, but rather a different breed of worm known as the pot worm. Let’s learn more about pot worms in compost.

What are Pot Worms?

If you’re wondering what pot worms are, they’re simply another organism that eats waste and gives aeration to the soil or compost around it. White worms in compost aren’t directly a danger to anything in your bin, but they do thrive on conditions that the red wigglers don’t like.

Where Do Pot Worms Come From?

All healthy garden soil has worms, but most gardeners are only familiar with the common red wiggler worm. So where do pot worms come from? They were there all along, but only a tiny fraction of what you see during an infestation. Once the conditions for pot worms gets hospitable, they multiply in alarming amounts. They won’t directly harm any other worms in the compost, but what is comfortable for a pot worm is not as good for common wiggler worms.

Dry out the compost heap by turning the pile frequently, skipping watering for a week or so and covering it with a tarp when rain threatens. Even the moistest compost will begin to dry out after a few days of this treatment.

Change the pH balance of the compost by adding some lime or phosphorus to the pile. Sprinkle wood ashes in among the compost materials, add some powdered lime (like that made for lining baseball fields) or crush up eggshells into a fine powder and sprinkle them all through the compost. The pot worm population should decline immediately.

If you’re looking for a temporary fix until the other conditions are met, soak a piece of stale bread in some milk and lay it on the compost pile. The worms will pile onto the bread, which can then be removed and discarded.