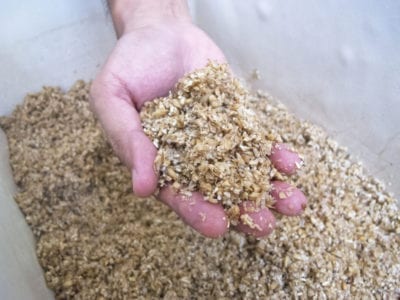 Home brewers often treat the leftover spent grains as a waste product. Can you compost spent grains? The good news is yes, but you need to manage the compost carefully to avoid a smelly mess. Home brew composting can be done in a bin, pile or even vermicomposter, but you must make sure the nitrogen rich mess is managed with plenty of carbon.

Can You Compost Spent Grains?

Composting home brew waste is just one more way you can personally reduce waste and reuse something that is no longer useful for its previous purpose. That wet mass of grain is organic and from the land, which means it can be sent back into the soil. You can take something that once was rubbish and turn it into black gold for the garden.

Your beer is made, and now it’s time to clean up the brewing space. Well, before you can even sample that batch, the cooked barley, wheat or combination of grains will need to be disposed of. You can choose to throw it in the garbage or you can utilize it in the garden.

Spent grain composting is being done on a larger scale by big breweries. In the home garden, it can be used in several ways. You can place it in a standard compost bin or pile, a worm composter, or go the easy way and spread it over empty vegetable beds and then work it into the soil. This lazy man’s method should be accompanied by some nice dry leaf litter, shredded newspaper, or other carbon or “dry” source.

Those spent grains will release a lot of nitrogen and are considered “hot” items for the compost bin. Without plenty of aeration and a balancing amount of a dry carbon source, wet grains are going to become a smelly mess. The breakdown of the grains releases compounds that can get quite stinky, but you can prevent this making sure the composting materials are well aerated and aerobic.

In the absence of enough oxygen entering the pile, a buildup of noxious odors occurs that will drive away most of your neighbors. Add brown, dry organic items such as wood shavings, leaf litter, shredded paper, or even ripped up toilet tissue rolls. Inoculate new compost piles with some garden soil to help spread microorganisms to help speed up the composting process.

Other Methods of Spent Grain Composting

Large brewers have gotten quite creative in re-purposing the spent grains. Many turn it into mushroom compost and grow delicious fungi. While not strictly composting, the grain can be used in other ways, too.

Many growers turn it into dog treats, and some adventurous sorts make various types of nutty breads from the grain.

Home brew composting will return that precious nitrogen back into your soil, but if it isn’t a process you are comfortable with, you can also just dig trenches in soil, pour the stuff in, cover with soil, and let the worms take it off your hands.