What Is Actinomycetes: Learn About Fungus Growing On Manure And Compost 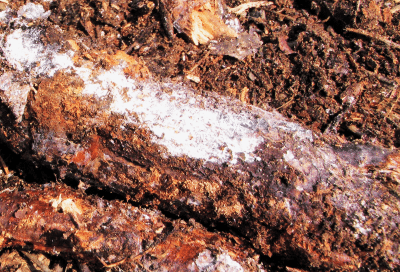 Composting is good for the earth and relatively easy even for a novice. However, soil temperature, moisture levels and careful balance of items in the compost are necessary for successful break down. White fungus in compost bins is a common sight when actinomycetes are present.

What is actinomycetes? This is a fungus-like bacterium, which works as a decomposer, breaking apart plant tissue. The presence of fungi in composting can be a bad thing and indicate improper balance of bacterial agents, but actinomycetes in manure compost and other organic material indicates successful decomposition of tough fibrous items.

Fungi are important components of breaking down compost, combined with bacteria, microorganisms and actinomycetes. The fine white filaments that resemble spider webs in organic piles are beneficial organisms that look like fungi but are actually bacteria. The enzymes they release break down items such as cellulose, bark and woody stems, items that are harder for bacteria to manage. It is important to encourage the growth of this bacterium for a healthy compost heap that breaks down quickly to deep rich soil.

Actinomycetes are naturally occurring bacterium found in soil. The majority of these bacteria thrive in the hot stages of composting, but some are only thermo tolerant and lurk around the cooler edges of your pile. These bacteria lack nuclei but grow multicellular filaments just like fungi. The appearance of the filaments is a bonus for better decomposition and a well-balanced compost situation.

Most actinomycetes require oxygen to survive, making it especially important to turn and aerate the pile regularly. Actinomycetes are slower in growth than bacteria and fungi and appear later in the compost process. They contribute to the rich deep brown color of finished compost and add a distinctly “woodsy” odor to a healthy pile.

Fungi are saprophytes which break down dead or dying material. They’re often found on animal waste, especially in dry, acidic and low nitrogen sites that do not support bacteria. Fungus growing on manure is an initial part of waste break down, but then the actinomycetes take over.

Actinomycetes in manure compost are also naturally occurring and help digest proteins and fats, organic acids and other materials that fungi cannot in moist conditions. You can tell the difference by looking for the spidery filaments in actinomycetes versus the clumps of gray to white fuzz created by fungal colonies.

That filament forming white fungus in compost bins is a great part of the decomposition process. For this reason, it’s important to encourage an environment that favors the bacteria’s growth. Moderately moist soil that’s low in acidity supports the formation of more bacteria. Low pH conditions must also be prevented as well as waterlogged soil.

Actinomycetes need a consistent supply of organic material upon which to dine, as they have no way to create their own food source. Well-aerated compost piles enhance bacteria growth. In a well-tended compost pile, beneficial levels of bacteria, fungus and actinomycetes are present, with each doing its particular specialty resulting in dark, earthy compost.

Printer Friendly Version
Read more about Composting Manures
<PreviousNext>
Did you find this helpful? Share it with your friends!
FacebookTweetPinEmail
Related Articles
Newest Articles
You might also like…
Additional Help & Information