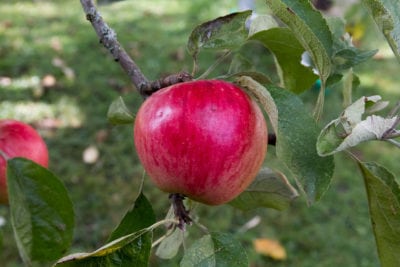 Akane is a very appealing Japanese variety of apples that is prized for its disease resistance, crisp flavor, and early ripening. It is also quite cold hardy and attractive. If you are looking for a cultivar that can stand up to disease and extend your harvesting period, this is the apple for you. Keep reading to learn more about Akane apple care and Akane growing requirements.

What are Akane Apples?

Akane apples originate from Japan, where they were developed by the Morika Experimental Station sometime in the first half of the 20th century, as a cross between Jonathan and Worcester Pearmain. They were introduced to the United States in 1937.

The height of Akane trees tends to vary, though they are often grown on dwarf rootstocks that reach a height of 8 to 16 feet (2.5 to 5 m.) at maturity. Their fruits are mostly red with some green to brown russeting. They are medium in size and a nice round to conical shape. The flesh inside is white and very crisp and fresh with a good amount of sweetness.

The apples are best for fresh eating rather than cooking. They do not store particularly well, and the flesh can start to become mushy if the weather gets too hot.

How to Grow Akane Apples

The trees perform well in a variety of climates. They are cold hardy down to -30 F. (-34 C.), but they also grow well in warm zones.

Akane apple trees are quick to bear fruit, usually producing within three years. They are also prized for their early ripening and harvest, which usually occurs in late summer.