Brown Spots On Apples Could Be Frost Rings 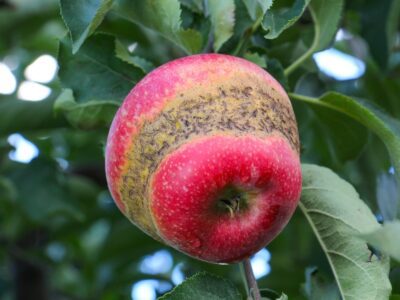 What comes to your mind when someone mentions harvesting apples from their backyard fruit tree? If you think of a shiny, red (or green) globe with smooth, shiny peel, you aren’t alone. But it’s important to realize that an apple with brown spots outside might be just as delicious.

While nobody wants to bite into a rotten or diseased fruit, the fact that there are brown spots on apple skin doesn’t mean the fruit should be tossed. Read on to find out what causes this kind of frost rings, aka russeting on apples.

Gardeners who are growing apples rely on the average last-frost date that applies to their area. But there is no guarantee that fruit trees will wait until after that date to bloom. In fact, many fruit trees bloom before the frost-free date and that frost can impact the amount and condition of the fruit.

The amount of fruit impacted by the frost will vary depending on how developed the flowers are at the time of the frost. A fruit tree blossom is quite frost-hardy as a bud, but less hardy as it develops into flowers. For example, apple buds shrug off temperatures as low as 15 degrees F (-9 C), while blooming apple blossoms may be injured if temperatures drop below 28 degrees F (-2 C).

You won’t notice apple fruit problems immediately after a frost, but when the fruits develop, there may be scabby rings around the lower part of the fruit. These are termed frost rings. They result from the blossom freeze when the apple tree was in bloom and fruits were in an early stage of development.

Those low temperatures damaged the exterior of the fruit, the surface tissue. As the fruit gets bigger, the damage forms a ring pattern beneath the fruit epidermis, separating it from the flesh. This frost ring makes the apple look different, but they taste exactly the same.

What Is Russeting on Apples?

Apple russeting is another name for changes in the color and texture of apple skin. The term refers to the actual change in appearance – where parts of the skin turn a darker, russet color – rather than from the frost phenomena. The rough, off-color skin defect, like frost ring, doesn’t ruin the taste of the fruit or affect its edibility.

Unlike “frost ring,” the term “apple russeting” does not necessarily implicate frost. It is an apple-skin condition caused by damage to the apple’s epidermis cells. The damage to the apple skin causes wound-sealing tissue to develop, called phellogen. This gives the appearance of a thin, corky skin surface.
Like frost ring, apple russeting can be caused by a frost while the apple blossom buds are developing. But it can also result from a variety of stress factors, including physical and biological ones. These include frost, but also rain, high humidity, and concentrated sunlight.

Apple russeting can also result from chemical burns from surfactants, foliar fertilizers, pesticides including sulfur or captan fungicides, and the carbamates Vydate and carbaryl. But it also has been traced back to pathogens like powdery mildew and any skin abrasion.