Apple Russet Control: How To Prevent Russeting Of Apples 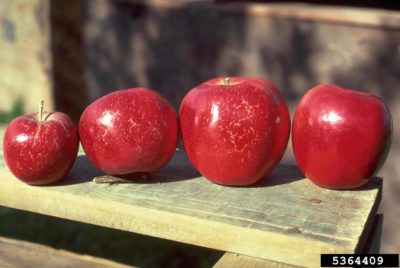 Russeting is a phenomenon that affects apples and pears, causing slightly harder patches of brown on the skin of the fruit. It doesn’t harm the fruit, and in some instances, it’s actually considered a feature, but it’s not always welcome. Keep reading to learn more about apple fruit russet and means of apple russet control.

Apple fruit russet is the brown scarring that sometimes appears on the skin of the fruit. It is a symptom rather than a disease, which means it can have several different causes. One of the most common causes of apple russet is genetic tendency. Some varieties are so prone to it that they actually get their name from it, like Egremont Russet, Merton Russet, and Roxbury Russet.

Other varieties like Pippin, Jonathan, and Gravenstein, while not named for it, are still very prone to apple fruit russet. If you’re uncomfortable with russeting, avoid these varieties.

Other Causes of Apple Russet

Although it’s naturally occurring in some apple varieties, the russeting of apples can also be a sign of more serious problems like frost damage, fungal infection, bacterial growth, and phototoxicity. Its presence is a good sign to check for these problems.

Yet another cause of apple russeting is a simple case of high humidity and poor air circulation. (And it’s conditions like these that often lead to the more serious problems listed above).

The most effective method of prevention is to keep trees well-spaced and reasonably pruned, with a strong but open canopy that allows good airflow and sunlight penetration.

It’s also a good idea to thin the fruits themselves to one or two per cluster soon after they start to form in order to keep moisture from building up between them. Try to opt for varieties that are not known for russeting, like Honeycrisp, Sweet Sixteen, and Empire.