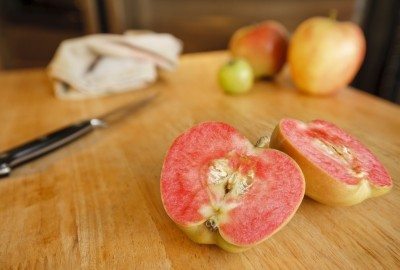 You haven’t seen them at the grocers, but apple growing devotees have no doubt heard of apples with red flesh. A relative newcomer, red-fleshed apple varieties are still in the process of being finessed. However, there are quite a number of red-fleshed apple trees available to the home fruit grower. Read on to learn more.

Apples with red flesh inside (as well as out) occur naturally in some regions of Central Asia — basically crabapples. These tend to be too bitter tasting for consumption, so breeders decided to cross them with scrumptious, sweet, white-fleshed apples to produce commercially viable apples with red flesh inside. The creation of sweet tasting red-fleshed apple trees is not only a novelty to grow, but these red-fleshed fruits may have antioxidant properties as well.

This breeding effort to bring tasty, salable, red-fleshed fruit began about 20 years ago and, as mentioned, has yet to make it into the produce aisle. However, in Europe, commercial releases of red-fleshed apple varieties have occurred. As of 2010, a Swiss breeder, Marcus Kobelt, brought the ‘Redlove’ series of apples to the European market.

The actual flesh color of these apples ranges from bright pink (Pink Pearl) to brilliant red (Clifford) to pink tinged (Taunton Cross) and even orange (Apricot Apple). These red-fleshed varieties also have different colored blooms rather than the white of other apple trees. Depending upon the cultivar, you may have light pink to crimson pink blossoms on your red-fleshed apple tree. Some varieties are sweet while others are on the tarter side, as with other apples.

As with apples in general, the list of red-fleshed apple tree varieties is huge even though they are relatively new to the market. A very abbreviated list of cultivars follows, but be advised that there are many others to ponder when choosing for your landscape. You will want to take into account not only the color and flavor of the fruit, but your regional microclimate and the storage potential of the fruit as well.

Varieties of red-fleshed apples include but are not limited to:

Do a little looking at catalogs on the Internet and research all the other varieties before deciding upon a suitable red-fleshed type for you.