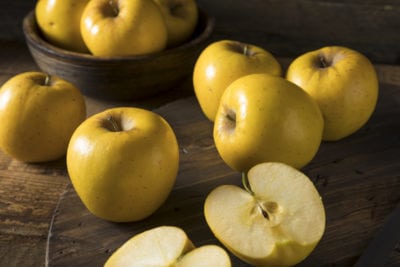 When we think of an apple, it is most likely the shiny, red fruit like the one from which Snow White took a fateful bite that comes to mind. However, there is something very special about the slightly tart, crisp bite of a yellow apple. There aren’t very many of these tasty fruits, but the few yellow apple cultivars available really stand out. If you are looking for apple trees with yellow fruit, read on for some outstanding varieties.

Apple harvest means pies, cider, and delicacies like fruit and cheese pairings. Most of the commercially grown apples that are yellow are chance seedlings or sports of other varieties. Some of the classics, such as Jonagold, may be very familiar but others are relatively new yellow apple varieties. There are some real gems in the list, one of which may fit your garden needs.

Classic Apples That are Yellow

It is often safest to go with tried and true varieties. The following is a list of oldies but goodies that you will recognize from your childhood:

Each of these yellow apple cultivars have been around for decades and may be residing in the form of a frozen pie or canned sauce at your home currently. All are economically important yellow apple trees and heavily exported.

Almost every fruit industry is constantly breeding, and doing trials of new varieties and apples are no exception. Many of these were actually discovered by accident but some were carefully bred to eliminate certain traits, such as blushing, for a perfectly yellow apple:

Washington State and several other temperate regions in the United States are big apple producers but they aren’t the only place apples flourish. Yellow apple trees are being developed in Asia, the Netherlands, France and many other countries and locales.

Breeding apples that are yellow isn’t high on the list, but there are still several delicious varieties:

There are over 750 varieties of apple with numerous golden yellow varieties. These were just a few but your local extension office can help you decide which varieties are best suited to your region.