Apple Tree Care: When And How To Prune An Apple Tree 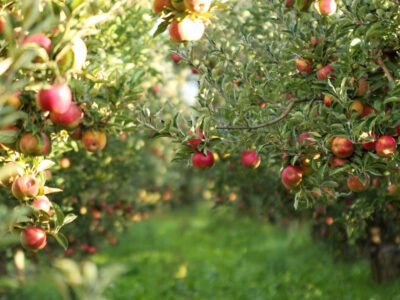 Apple trees may make great shade trees, but if your primary purpose in planting is to garner the delicious fruit, you need to pull out those pruning shears and get to work. Let’s learn how and when to prune apple trees to get the most from your apple harvest.

Apple tree trimming is beneficial for several reasons: removing diseased or damaged limbs, maintaining a controlled height from which fruit may be more easily picked, developing a strong structure for fruit production, and encouraging new limbs.

Pruning apple trees is essential to the overall health of the tree. The shape of the apple tree during the budding season and following winter will influence the number of flowers, and hence, the condition of fruit.

Pruning not only increases sunlight, shapes the tree, and removes limbs that are unnecessary, but also promotes the size of the apple, uniform ripening, ups the sugar content, and decreases insects and diseases by allowing for better overall spray coverage and efficient drying post rain shower.

When to Prune Apple Trees

Although apple tree trimming may be accomplished any time of the year, late winter to very early spring is most advisable (March and April), after the worst of the cold snaps to minimize possible injury due to frost.

On a mature fruit producing apple tree, pruning should remove the older, less fruit productive branches after their peak three to five year period. Summer is the best time to remove these older limbs when it is most obvious which ones those are. It is also a good time to prune diseased or damaged areas of the apple tree as they become visible.

Do not prune an older “shade” tree back to the size of a fruiting apple tree in one season. Spread the thinning out over a couple of years as part of your routine apple tree care.

How to Prune an Apple Tree

There are several points to consider when pruning an apple tree: distance from the central branch to a lateral branch before cutting, angle, leaving any water sprouts, shortening limbs or taking all the way down to the trunk of the apple tree, to name a few.

On neglected or overly vigorous apple trees, prune heavily. Go for it, except as mentioned above on a “shade” tree, wherein pruning should be spaced out over several years. Do not prune too closely. Make your heading cut just beyond a bud and thinning cuts beyond the base of the branch being discarded. Use a saw for large limbs, hand pruners for twigs, and loppers for medium branches.

Water sprouts, or suckers, are vibrant offshoots, which suck the nutrients away from the apple tree, resulting in lower apple production. Usually found at the base of the apple tree or along its crotches, they generally should be removed. On occasion, they may be left to fill in an open area.

Remove any branches that grow downward, rub, shade, or generally impede the growth of the apple tree’s scaffold branches. Head back any suckers or branches that are taller than the uppermost buds of the trunk.

Whorls are found when branches intersect and originate at the same location on the trunk or branch. Select the best and remove the others.

Remember, you are creating a canopy that encourages sunlight and access to spraying and harvesting. Resist the fast and easy approach to “top” your apple tree to inhibit its growth. This may result in more fruit production for a couple of years, but in the long run proposes a weak apple tree structure. Utilize the correct tools, some gumption, and enjoy your next bumper crop of apples.