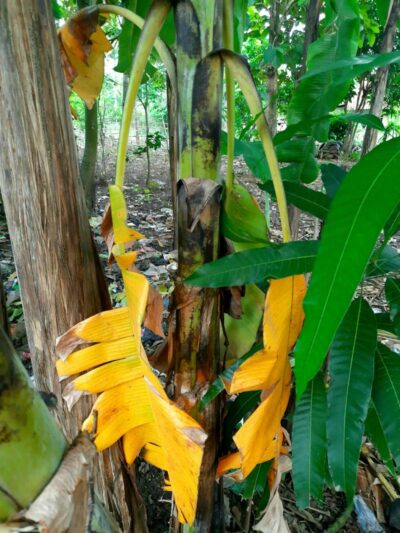 Bananas may be one of the most popular fruits sold in the United States. Grown commercially as a food source, bananas also feature prominently in warm region gardens and conservatories, making striking additions to the landscape. When planted in areas with plenty of sun, bananas are not all that hard to grow, but problems with banana plants are bound to crop up nonetheless. What kinds of banana plant pests and diseases are there? Keep reading to find out how to solve problems with banana plants.

Bananas are monocotyledonous herbaceous plants, not trees, of which there are two species– Musa acuminata and Musa balbisiana, native to southeast Asia. Most banana cultivars are hybrids of these two species. Bananas were most likely introduced to the New World by southeast Asians around 200 B.C. and by Portuguese and Spanish explorers in the early 16th century.

The majority of bananas are not hardy and are susceptible to even a light freeze. Extreme cold damage results in the dieback of the crown. Leaves will also naturally shed in exposed areas, an adaptation to tropical storms. Leaves may droop from under or overwatering while brown edges indicate a lack of water or humidity.

Another growing banana plant problem is the plant’s size and propensity to spread. Keep that in mind when locating a banana in your garden. Along with these concerns, there are many banana pests and diseases that may afflict a banana plant.

A number of insect pests can affect banana plants. Here are the most common:

There are quite a number of banana plant diseases that can afflict this plant as well.

These are just some of the pests and diseases that can afflict a banana plant. Vigilant attention to any changes in your banana will keep it healthy and fruitful for years to come.