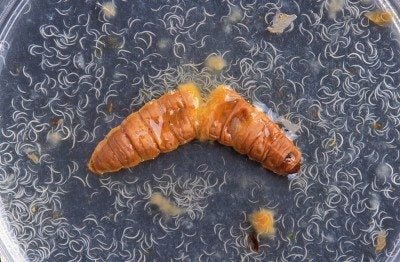 Entomopathogenic nematodes are rapidly gaining in popularity as a proven method of eradication of insect pests. What are beneficial nematodes though? Keep reading for more information on using nematodes as pest control.

What are Beneficial Nematodes?

Members of the Steinernematidae and Heterorhabditidae families, beneficial nematodes for gardening purposes, are colorless roundworms which are non-segmented, elongated in shape, and usually microscopic and commonly found living within the soil.

How do Beneficial Nematodes Work?

Beneficial nematodes as pest control will attack soil borne insect pests with no harmful effects on earthworms, plants, animals, or humans, making it an environmentally friendly solution. They are morphologically, ecologically, and genetically more diverse than any other animal group with the exception of arthropods.

With over 30 species of entomopahogenic nematodes, each with a unique host, finding a suitable nematode to aid in pest control is not only a “green” solution of integrated pest management but a simple one as well.

Beneficial nematodes have a lifecycle consisting of egg, four larval stages, and an adult stage. It is during the third larval stage that the nematodes seek a host, usually insect larvae, and enter it through the host mouth, anus, or spiracles. The nematode carries bacteria called Xenorhabdus sp., which is subsequently introduced into the host whereupon death of the host occurs within 24 to 48 hours.

The Steinernematids develop into adults and then mate within the host’s body, while the Heterorhabditids produce hermaphroditic females. Both nematode species ingest the host’s tissue until they mature to the third juvenile phase and then they leave the remains of the host body.

How to Apply Entomopathogenic Nematodes

Beneficial nematodes for gardening can be found in sprays or soil drenches. It is crucial to apply them at the perfect environmental conditions needed for their survival: warm and moist.

Irrigate the application site both before and after introducing the nematodes and only use them when soil temperatures are between 55 and 90 degrees F. (13-32 C.) in filtered sun.

Use the nematode product within the year and do not store in areas of high heat. Remember, these are living creatures.