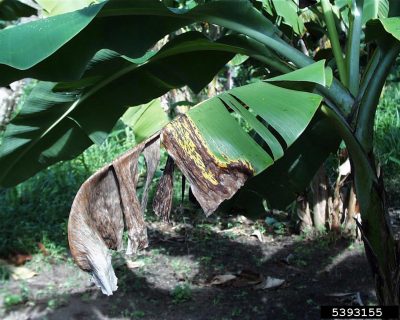 Image by Fred Brooks, University of Hawaii at Manoa, Bugwood.org

Banana trees (Musa spp.) are the largest herbaceous perennial plants in the world. Cultivated for their fruit, banana plantations are meticulously managed, and the trees can produce for up to 25 years. Any number of banana pests and diseases can derail a successful plantation, however, not to mention environmental banana plant problems such as cool weather and high winds. Any of the problems affecting bananas may afflict the home gardener as well, so it’s important to learn to identify banana pests and diseases so you can nip them in the bud. Read on to learn more.

There are quite a number of banana tree insects that can cause minor damage to a single plant or wreak havoc through an entire plantation. Some of these banana pests act as vectors of disease as well. Control of pests on bananas requires early identification.

Banana aphids are an example of a pest that acts as a vector of disease. These pests are soft-bodied, wingless, and almost black. An infestation of these aphids causes curled, shriveled foliage. The pest may also transmit banana bunchy top disease to the plant, resulting in chlorotic leaf margins, brittle leaves, and, as the name suggests, a bunchy top.

The aphid population is often tended to by ants, so control of the disease involves treating for ants. Insecticides, soapy water, and horticultural oil can help mitigate the population of aphids, but if the plant already has bunchy disease, it is best to destroy the plant. There are no chemical controls to protect against the transmission of banana bunchy top, so the only control method is to prevent the transmission by ridding the plant of the aphids. That or plant less susceptible cultivars.

Aphids can also transmit banana mosaic disease. This disease also presents with chlorotic mottling or stripes on foliage. Fruit will be distorted, sometimes with chlorotic streaking as well. If the banana becomes afflicted with banana mosaic, it is best to destroy it. Plant virus free material next time, control aphids, and remove susceptible host plants including weeds from around the tree.

Banana weevils are nocturnal pests that slow plant growth and reduce fruit yields. They tunnel through the corms, which can cause plants to wilt and topple over. Eventual destruction and plant death follows. Treat the plant with neem powder to reduce their population and apply insecticide at the time of planting to control weevils.

Coconut scale isn’t just a banana plant problem. They attack many hosts, including coconuts. Scales will be found on the underside of leaves as well as other areas of the banana tree and cause tissue discoloration and yellowing of foliage. Biological control, such as the introduction of ladybugs, is the most effective control method.

Several different types of thrips are known to infest banana trees and can be controlled using insecticides, soapy water, and oil.

Nematodes are a major problem amongst banana growers. There are many different types of nematodes, but they all love to feed on banana plants. Nematicides, when properly applied, can protect a crop. Otherwise, the land must be left fallow for up to three years.

Sometimes, banana plant diseases are transmitted via insect pests but not in every case.

Banana bacterial wilt may be transmitted by insects, but also by farm equipment, other animals, and on infected rhizomes. The first signs of infection are yellow leaves that later brown and die. If infection occurs late in fruit production, the buds dry and blacken. Fruit ripens early and unevenly, and infected fruit is rusty brown. Sanitize garden equipment to prevent spread and remove excess male buds. Infected plants should be destroyed and replaced with disease free specimens.

Black leaf streak, or black sigatoka, is a fungal disease that is fostered by high humidity. Spores are spread by the wind. The first signs are red/brown spots on the underside of leaves and dark or yellow bordered spots with a gray center. Leaf surfaces eventually die, and fruit bunches do not develop properly. Plantations use fungicide application to control black sigatoka, increase the space between trees to improve circulation, and remove leaves that show any signs of infection.

Cigar end rot is a fungal disease caused by either Verticillium fungi or Trachysphaera. In the foremost case, the tips of the banana (fingers) wrinkle and darken and begin to rot. In the latter case, the rotted areas become covered with white spores, which makes the fingers look like the ash end of a smoked cigar. Commercial growers remove infected flowers, bag banana bunches with perforated polyethylene and, if necessary, utilize chemical control.

Moko disease is caused by a bacterium, Ralstonia solanacearum, and results in chlorotic, wilted leaves with the eventual collapse of the entire canopy and pseudostem. It can be spread by insects or human interactions. If Moko is suspected, remove male buds, sterilize garden tools, and destroy any infected plants as well as any neighboring plants.

Panama disease, or fusarium wilt, is another fungal disease that infects roots that, in turn, blocks the ability of the plant to uptake nutrients and water. Foliage is also affected and shows as yellowing of older leaves, leaf sheath splitting, wilting, and eventual canopy death. This is an extremely deadly disease that spread through the soil, irrigation water, and infected rhizomes and is a global threat to banana production. There is no effective treatment once the trees have become infected; thus, they should be removed and destroyed.

These are just a few of the pest and disease problems potentially affecting bananas. Be vigilant and monitor the bananas for signs of infestation or infection. Select disease free plants, sanitize equipment, and allow room between planting to reduce humidity and allow for better air circulation to reduce the chance of pest or disease on banana trees.