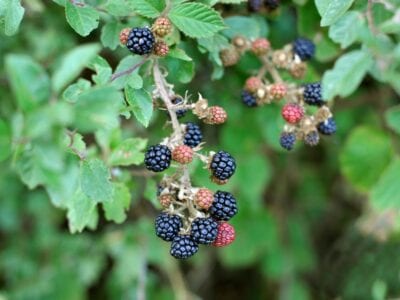 The blackberry bramble in the wild is an important food and shelter plant for many birds and mammals. In the garden however, a wild blackberry plant may be viewed with horror, due to the fact that it can be quite invasive. Even so, growing wild blackberries is becoming quite popular due to their delicious flavor of course but also their high antioxidant content.

Wild Blackberry that is Invasive

More than 2,000 blackberry varieties can be found growing throughout the Northern hemisphere. In California alone there are 11 species of wild blackberry plant (Rubus fruticosus), four of which are considered weeds. Two of these are non-native: cutleaf blackberry (R. laciniatus) and Himalaya blackberry (R. discolor) and two are native to the region.

Of the native species, Western thimbleberry (R. parviflorus) competes with evergreen establishment in reforested regions while Pacific blackberry (R. ursinus) infiltrates streambeds and ditches. Both wild blackberry invasives can be found throughout California with few exceptions.

Of the wild blackberry invasives, the most bothersome is Himalaya blackberry.

Wild blackberry plants thrive throughout the U.S. but are especially prevalent in the welcoming conditions of the Pacific Northwest. Of the four invasive wild blackberry brambles, thimbleberry is the only non-vining species which also lacks the prickly stems of the others.

Himalaya and cutleaf both have five-angled stems, although Himalaya can be distinguished by its five leaflets, each serrated and oval. Cutleaf in comparison has five deeply lobed leaflets.

All four wild blackberry plants bloom in white to pink, with staggered bloom times beginning with Western thimbleberry and Pacific in March to Himalaya and cutleaf blooming in May.

The resulting fruit is a collection of tiny, fleshy one seeded fruit that are blue/black/ to deep purple in color.

Despite their reputation for taking over, blackberries are becoming a popular commercial crop, grown for not only their delicious flavor but also their health benefits. Until recently with the development of new varieties, growing wild blackberries was impractical. Wild blackberries had two problems to overcome: they do not produce fruit in their first year, and unless heavily protected, the canes tend to die during the winter.

Blackberries thrive in USDA zones 5-10. Today, the home gardener can obtain newer cultivars of wild blackberry to grow or propagate from wild stock. The problem with growing from wild plants is that they tend to carry bacteria and fungal diseases which can affect other plants.

If you wish to grow blackberries from cultivated stock, choose an area with full sun, well-draining soil and a pH ranging from 6.0-6.5.

How to Grow Wild Blackberry Bramble

If you want to grow uncultivated  (wild) blackberries, start with a stem cutting from a healthy plan and propagate it indoors. Take the cutting with sharp pruning shears that have been sterilized in a bleach solution; one part bleach to nine parts water, soaked for 10 minutes and then allowed to air dry.

Make a 45 degree angle cut a 4-10 inch (10-25cm.) cutting of young, malleable wood from the tip of a side branch. Put the cutting in water immediately. If taking additional cuttings, be sure to wipe the pruner blades off with rubbing alcohol prior to the next cut.

Remove the cutting(s) from the water and shake off any excess. Dip the cut end into rooting hormone. Position the cut end in moist, prepared medium made up of sterilized loam, sphagnum moss, and sterile horticultural sand, and fill in around the cutting. Cover the pot with an opaque plastic bag secured with a rubber band.

Work compost into the top 6 inches (15 cm). Remove the cutting from the container, loosen up the roots, plant and water the cutting in. Mulch around the new wild blackberry plant to retain moisture and retard weeds. Provide an inch (2.5 cm.) of water per week depending upon weather conditions.

Printer Friendly Version
Read more about Blackberries
<Previous
Did you find this helpful? Share it with your friends!
FacebookTweetPinEmail
Related Articles
Newest Articles
You might also like…
Additional Help & Information