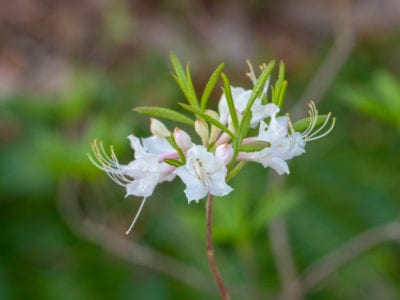 Wild azalea (Rhododendron canescens) is a striking plant also known as mountain azalea, hoary azalea, or Florida Pinxter azalea. Although it is native to the southeastern United States, wild azalea grows in mild climates across much of the country. Want to learn about growing wild azaleas in your garden? Read on for more information.

Learn how to grow wild azaleas in the landscape is as easy as enjoying their blooms. Hummingbirds, bees, and butterflies are attracted to the clusters of sweet-smelling pink or white flowers that appear before new growth in spring too. That being said, the plant is also attractive to wildlife, including hungry deer. Keep this under consideration before adding it to the garden.

Mountain azalea thrives in full sun or partial shade, such as filtered light under tall deciduous trees. Too much shade will significantly decrease blooming.

Soil should be moist and well drained. Like all rhododendrons and azaleas, wild azaleas prefer acidic soil.

Water wild azalea regularly during the first two years. Water deeply at the base of the plant and avoid wetting the foliage. If you use sprinklers, irrigate in the morning so the leaves have time to dry before evening as damp leaves may invite fungal diseases.

Fertilize wild azalea in spring and again in late spring or early summer. Don’t feed after midsummer, as the tender new growth is more susceptible to frost when temperatures drop in fall.

Note: All parts of wild azalea plants are highly toxic, and ingestion may lead to a number of severe symptoms including stomach pain, nausea, vomiting, respiratory difficulties, weakness, loss of energy, depression, paralysis of legs and arms, coma, and death.