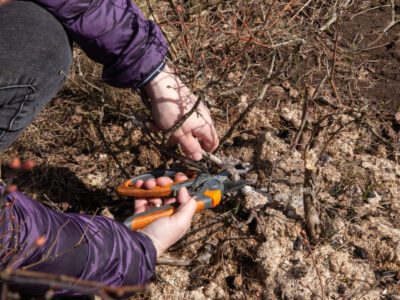 Pruning blueberries is essential in order to maintain their size, shape, and productivity. When blueberry plants are not pruned, they can become overgrown masses of weak, leggy growth with small fruit. However, severe pruning can lead to larger berries but fewer in number. So now, the question you may be asking is, “How do I prune blueberry bushes enough, but not too much?”

How Do I Prune Blueberry Bushes?

“How do I prune blueberry bushes;” one of the most commonly asked questions when growing blueberries. Knowing how to prune blueberries is important; proper pruning of blueberries can make the difference between an average crop and a plentiful one.

The type and amount of blueberry plant pruning, however, may depend on the type and size of the bush. For trimming blueberry bushes, you should remove any lower growth to prevent fruits from settling on the ground.

When pruning blueberries, you’ll want to allow light to penetrate the center of the plant. This means any criss-crossing branches should be removed to allow for more sunlight and better air circulation. Also, cut out any short, soft shoots developing from the base of the bush late in the season. Prune off canes and twigs that have been damaged by winter injury, diseases, insects, etc. In addition, prune out unproductive canes that have not produced any new growth.

Generally, for blueberry plant pruning, you should remove the two oldest canes each winter. In the first two years, adequate pruning will help train blueberry bushes into the most desired shape for promoting maximum fruit production.

When is the Best Time for Blueberry Plant Pruning?

Pruning should be done annually, beginning at the time plants are set. The best time to prune blueberries is in late winter to early spring (January to early March) after all chance of severe weather has passed.

Young bushes generally do not require as much pruning, however, trimming blueberry bushes throughout the growing season may be necessary to maintain overall health and vigor. For instance, throughout the growing season, any weak or low growing shoots should be removed as well as dead, diseased, or insect infested canes that may be found. Mature bushes, on the other hand, typically require more selective cuts to maintain a desired shape and productive fruiting.

Now that you know a little more about how to prune blueberries, you can have a healthy and productive blueberry bush.