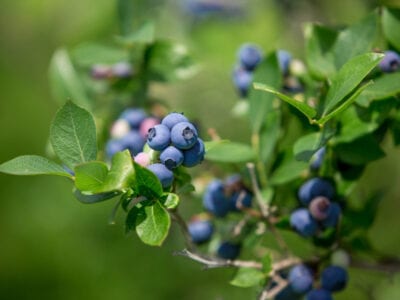 Labeled of late as one of the “super foods” for its antioxidant properties, blueberries have always been on my top ten list of favorite foods… blueberry pancakes, blueberry muffins, blueberry crumble. Ok, maybe that isn’t exactly how they want us to eat this power berry but, regardless, there is no end of good reasons to grow your own bush. So what happens when you see witches’ broom in the blueberry bush? Is that it for the blueberry pancakes? Let’s find out.

What is Witches’ Broom in Blueberry Bushes?

The year after infection, blueberry bushes afflicted with witches’ broom produce a multitude of swollen, spongy shoots with tiny leaves and reddish bark rather than the green found on healthy young branches. This malformation is called a “broom” and they continue to appear year after year.

As the broom ages, it becomes progressively brown, shiny, and then dull, until eventually drying and cracking. Affected blueberries have multiple witches’ brooms on the plant. The plant will likely cease fruit production.

Witches’ broom is caused by the rust fungus Pucciniastrum goeppertianum, which affects both blueberries and fir trees. When P. goeppertianum afflicts firs, it results in a yellowing and eventual needle drop. The spores of this fungus are produced on the fir needles and carried by the wind, infecting those blueberry plants that are in close proximity.

The fungal disease is found in North America, Europe, Siberia, and Japan and spends a part of its life on Highbush and Lowbush blueberry bushes. The rest of its life cycle is spent on fir trees, but both hosts must be present to ensure the survival of P. goeppertianum.

While the fungus attacks just the needles on firs, it grows into the bark of blueberry plants, affecting the entire plant. The fungus will live off the host blueberry plant for many years, continuing its life cycle by producing spores off the brooms, which will, in turn, infect balsam fir trees.

How to Combat Witches’ Broom on Blueberry Bushes

Because the fungus that causes blueberry bushes with witches’ broom is perennial and systemic in nature, the disease is hard to combat. Fungicides do not work when blueberries have witches’ broom nor can pruning remove the pathogen since it is infiltrating the entire plant.

The best defense is prevention. Do not plant blueberry bushes within 1,200 feet (366 m.) of balsam fir trees. Once the plant has the disease, there is nothing to be done about it. It is best to eradicate any diseased plants with an herbicide to prevent further spread.