Signs And Symptoms Of Witches’ Broom On Trees And Shrubs 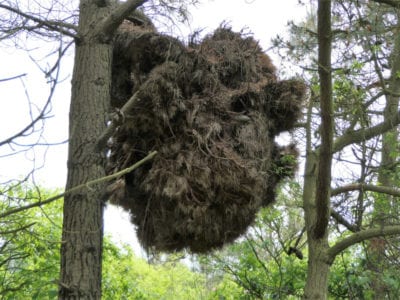 Ever seen those odd-looking, broom-like distortions in a tree? Perhaps it’s one of yours or in a tree nearby. What are these and do they cause any harm? Keep reading to find out more about the signs and symptoms of witches’ broom disease.

What is Witches’ Broom Disease?

Witches’ broom is a symptom of stress found in woody plants, mainly trees, but it also affects shrubs as well. This includes deciduous trees and shrubs as well as conifers and evergreen varieties. The stress results in a deformed mass of twigs and branches, which appear broom-like in appearance. As brooms were once fashioned together from bundles of twigs and since witches were presumed to be responsible for anything unusual, these abnormalities became known as witches’ brooms.

Witches broom disease is not caused by witches, however. They’re actually caused by stress that is brought on by pests or disease. This includes anything from mites, aphids, and nematodes to fungi, viruses, and bacterial organisms (phytoplasmas).

In addition, parasitic plants like mistletoe, which cause stress to host trees, can lead to the formation of witches’ broom. Environmental factors may also be to blame, and some are caused by genetic mutations.

Generally, the type of tree/shrub is a good indicator of its causal agent. For instance, pine brooms are commonly caused by rust fungus. Fungal infections can also affect cherry trees and blackberry bushes, forming broom growth. Peach trees and black locust can be affected by viruses that can result in witches’ brooms. Hackberry trees can get brooms as well, and these are normally caused by both fungus and mites.

Mites can also be responsible for witches’ broom in willow trees. Aphids are generally to blame for these deformities in honeysuckle shrubs, while phytoplasmas lead to the disease in ash and elm trees.

Witches’ broom can be easily identified by the dense clusters of twigs or branches, which grow from a central source—resembling a broom. It is best seen on deciduous trees or shrubs when they are not in leaf. While needled trees, like pines, may consist of denser needles.

There may be only one broom seen, or in some cases, there may be many. Some may be large, while others may appear quite small and less noticeable.

Witches’ broom can occur for several months to several years, and while it may be unsightly to some people, it really poses no serious threat to the tree or shrub affected. There is currently no cure or treatment for witches’ broom. You can, however, prune out the broom growth several inches (8 cm.) below the point of its formation, if desired.