Tips For Using Breadfruit: Learn What To Do With Breadfruit 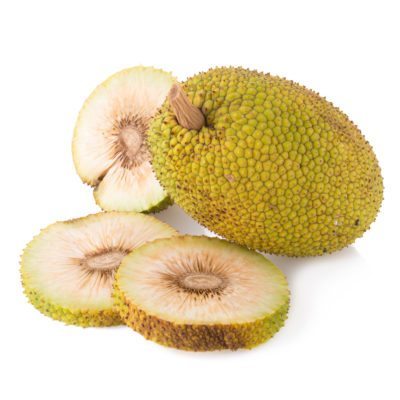 Belonging to the mulberry family, breadfruit (Artocarpus altilis) is a staple amongst peoples of the Pacific Islands and throughout southeast Asia. For these people, breadfruit has a multitude of uses. Cooking with breadfruit is the most common method for using breadfruit, but it is used in various other ways too.

Even if you don’t live in these regions, breadfruit can sometimes be obtained at specialty markets in larger metropolitan areas. If you are lucky enough to grow this tree or have access to it and are feeling adventurous, you probably want to know what to do with breadfruit. Read on to find out how to use breadfruit.

By some accounts there are almost 200 varieties of breadfruit. Most of these have a purgative effect when eaten raw, so generally speaking, it is cooked in some manner whether steamed, boiled, or roasted, for human consumption.

What to Do with Breadfruit Trees

As mentioned, when eaten, breadfruit is almost exclusively used cooked. Breadfruit has a number of other uses besides that of a food staple. Livestock are commonly fed the leaves.

Breadfruit exudes milky white latex that is used in various cultures. The sticky substance has been used to catch birds by early Hawaiians who then plucked the feathers for their ceremonial cloaks. The latex was also boiled down with coconut oil and used to caulk boats or mixed with colored soils and used to paint boats.

The yellowish gray wood is lightweight and strong, yet malleable and primarily termite resistant. As such, it is used as a housing material and for furniture. Surfboards and traditional Hawaiian drums are also sometimes constructed using breadfruit wood.

Although fiber from the bark is hard to extract, it is very durable, and the Malaysians used it as a clothing material. Filipino people use the fiber to make water buffalo harnesses. The blossoms of the breadfruit are combined with the fiber of the paper mulberry to create loincloths. They were also dried and used as tinder. A pulp of breadfruit has even been used to make paper.

How to Use Breadfruit Medicinally

The leaves are not the only parts of the plant to be used medicinally. The blossoms are roasted and rubbed onto the gums to treat toothaches, and the latex has been used to relieve sciatica and skin ailments. It may also be diluted and ingested to treat diarrhea.

How to Use Breadfruit in the Kitchen

If you have ever been to a Hawaiian luau, you may have tried poi, a dish made from taro, but in the early 1900s, Hawaii had a shortage of taro, so the indigenous people took to making their poi from breadfruit. Today, this Ulu poi may still be found, most commonly in the Samoan community.

Breadfruit is often featured in Sri Lankan coconut curries, but it is so versatile it can be candied, pickled, mashed, sautéed, roasted, and fried.

Before cutting into breadfruit, it is a good idea to oil your hands, knife, and cutting board so the sticky latex doesn’t adhere. Peel the breadfruit and discard the core. Cut the fruit into thin slices and then make some long, thin cuts into your slices. This will help the breadfruit absorb the marinade.

Marinate the sliced breadfruit in a combination of white wine vinegar, turmeric, chili powder, salt and pepper, garam masala, and garlic paste. Allow the slices to marinate for 30 minutes or so. Heat oil in a pan and fry the slices for five minutes per side until both sides are crispy and golden brown. Serve hot as a snack or as a side with curry.

To make the Ulu poi mentioned above, steam or boil the peeled, prepared fruit until soft then simmer it in coconut milk, onions, and sea salt until desired consistency.

Printer Friendly Version
Read more about Breadfruit
<PreviousNext>
Did you find this helpful? Share it with your friends!
FacebookTweetPinEmail
Related Articles
Newest Articles
You might also like…
Additional Help & Information