What Is Cocona – Learn How To Grow Cocona Fruit 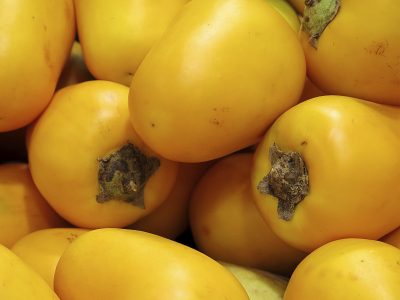 Long known to the native peoples of Latin America, the cocona fruit is most likely unfamiliar to many of us. What is cocona? Closely related to the naranjilla, the cocona plant bears fruit that is actually a berry, about the size of an avocado and reminiscent in flavor to a tomato. Cocona fruit benefits have been made use of by South American Indians for a variety of maladies as well as a food staple. How do you grow cocona, or can you? Read on to find out about growing cocona fruit and other cocona fruit info.

Cocona (Solanum sessiliflorum) is sometimes also referred to as Peach Tomato, Orinoko Apple, or Turkey Berry. The fruit is orange-yellow to red, about ¼ inches (0.5 cm.) across filled with a yellow pulp. As mentioned, the flavor is similar to that of a tomato and is often used similarly.

There are several varieties of cocona. Those found in the wild (S. georgicum) are spiny, while those in cultivation are generally spineless. The herbaceous shrub grows to around 6 ½ feet (2 m.) in height with haired twigs and downy stems populated with ovate, scalloped leaves which are downy atop and veined beneath. The plant flowers in clusters of two or more at the leaf axils with 5-petaled, yellow-green blooms.

Cocona fruit is surrounded by a thin but tough outer skin that is covered with peach-like fuzz until the fruit is completely ripe. At maturity, the fruit becomes smooth, golden orange to red-brown to deep purple-red. The fruit is picked when fully ripe and the skin becomes somewhat wrinkled. At this point, cocona fruit gives off a mild tomato-like aroma accompanied by a flavor that is similar to tomato with limey acidity. The pulp contains numerous flat, oval, cream-colored seeds that are innocuous.

Cocona plants were first described in cultivation by the Indian people of the Amazon region of Guaharibos Falls in 1760. Later, other tribes were found to be growing cocona fruit. Even farther down the timeline, plant breeders began to study the plant and its fruit to see if it had the potential for hybridizing with naranjilla.

This fruit is commonly eaten by the locals and marketed throughout Latin America. Cocona is a domestic product in Brazil and Colombia and is an industry staple in Peru. Its juice is currently exported to Europe.

The fruit can be eaten fresh or juiced, stewed, frozen, pickled, or candied. It is prized for use in jams, marmalades, sauces, and pie fillings. The fruit can also be used fresh in salads or cooked with meat and fish dishes.

The cocona fruit is highly nutritious. Rich in iron and vitamin B5, the fruit also contains calcium, phosphorous, and lesser amounts of carotene, thiamin, and riboflavin. The fruit is low calorie and high in dietary fiber. It is also said to reduce cholesterol, excess uric acid, and relieve other kidney and liver diseases. The juice has been used to treat burns and venomous snake bites as well.

Cocona is not frost-hardy and must be grown in full sun. The plant can be propagated either by seed or root cuttings. While cocona has been known to flourish in sand, clay, and scarified limestone, good drainage is paramount to successful growing.

There are between 800-2,000 seeds per fruit and new plants readily volunteer from existing cocona shrubs. You will most likely need to find your seeds at a reputable nursery online if you intend on trying to grow them.

Cocona plants begin fruiting 6-7 months from seed propagation. Cocona are self-fertile but bees can’t resist the flowers and will transfer pollen, resulting in natural crosses. Fruit will mature around 8 weeks after pollination. You can expect 22-40 pounds (10 to 18 kg.) of fruit per mature plant.