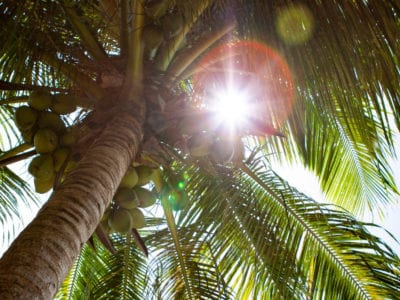 Think coconut trees and immediately warm trade winds, blues skies, and gorgeous sandy beaches come to mind, or at least to my mind. The truth though, is that coconut trees will live anywhere the temperature does not dip below 18 degrees F. (-7 C.), although the chances of some or any fruit lessen in direct correlation to the chilliness of the region. Coconut trees are fairly low maintenance, interesting specimens for the home garden. Even so, they are susceptible to some coconut palm diseases and environmental stresses, such as coconut wilting.

Help, My Coconut Fruit is Wilting!

The first order of business is to figure out why the coconut is wilting. As mentioned, the weather may be a consideration. Not just overly cold temps, but plants — especially young palms, can get sunburned, which will adversely affect foliage.

Arid conditions with low humidity levels will also cause wilting. Provide adequate protection from the fierce sun when the plant is immature and give the palm plenty of water, especially during the growing season. Basically, avoid stressing the palm.

Coconut palms that do not get enough nutrients are more susceptible to coconut palm diseases. Use a high-quality, slow-release fertilizer that won’t be washed away with the rain. Fertilize coconut palms during their growth period four to five times per year. To avoid burning the trunk, keep the fertilizer 2 feet (0.5 m.) out from the tree.

There are a number of diseases that may afflict a coconut palm that may cause wilting, but caring for sick coconut trees is not always an option. Sometimes treating a wilting coconut tree means it is best to remove the tree and destroy it. Many fungi and diseases can infect the surrounding area for long periods of time, so it is often better to leave the area to fallow, or remain unplanted, for at least a year.

Palms that are damaged from cold or other mechanical or environmental issues should be treated with copper fungicide to protect them from bacteria and fungi. For further assistance with treating a wilting coconut palm, check with your local Extension office.

Printer Friendly Version
Read more about Coconut Trees
<PreviousNext>
Did you find this helpful? Share it with your friends!
FacebookTweetPinEmail
Related Articles
Newest Articles
You might also like…
Additional Help & Information