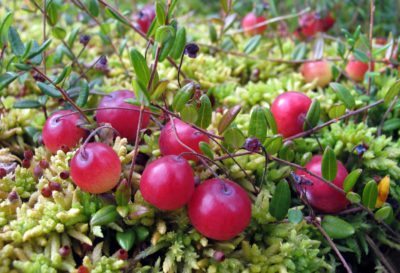 For the unadventurous, cranberries may only exist in their canned form as a gelatinous gooey condiment destined to moisten dry turkeys. For the rest of us, cranberry season is looked forward to and celebrated from fall into winter. Yet, even cranberry devotees may not know much about this little berry, including different cranberry varieties because, yes indeed, there are several varieties of cranberry.

C. oxycoccus will not hybridize with the diploid V. macrocarpon, thus research has been focused only on using the latter.

There are more than 100 different cranberry plant types or cultivars that grow in North America and each new cultivar’s DNA is generally patented. New, faster growing cultivars from Rutgers ripen earlier and with better color, and, they have higher sugar contents than traditional cranberry varieties. Some of these varieties include:

Other varieties of cranberry available from the Grygleski family include:

In some regions of the United States, older cultivars of cranberry plants are still thriving over 100 years later.

Printer Friendly Version
Read more about Cranberries
<PreviousNext>
Did you find this helpful? Share it with your friends!
FacebookTweetPinEmail
Related Articles
Newest Articles
You might also like…
Additional Help & Information