Fig Tree Watering: What Are Water Requirements For Fig Trees 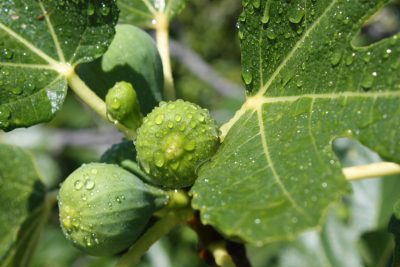 Ficus carica, or common fig, is native to the Middle East and western Asia. Cultivated since ancient times, many species have become naturalized in Asia and North America. If you’re lucky enough to have one or more fig trees in your landscape, you might be wondering about irrigating fig trees; how much and how often. The following article contains information on the water requirements for fig trees and when to water fig trees.

About Watering a Fig Tree

Fig trees grow wild in dry, sunny regions with deep soil as well as in rocky areas. They thrive in light, well-draining soil but will also do well in poor soil types. Hence, the tree does especially well in areas that mimic the Middle Eastern and Mediterranean climates.

Fig trees have a deep, aggressive root system that searches out groundwater in aquifers, ravines, or through cracks in rocks. Thus, the common fig is especially suited for seasonal drought but that doesn’t mean you should forget about watering a fig tree. Fig tree watering should be fairly consistent, especially if you want to be rewarded with plenty of its succulent fruit.

When to Water Fig Trees

Once a fig tree is established, you probably won’t have to water it unless there is literally no rainfall for a significant period. For younger trees, steps should be taken to provide the tree with adequate irrigation as well as a good layer of mulch to help the tree retain moisture. Figs love to be mulched with organic material such as grass clippings. Mulching also may reduce the incidence of nematodes.

So, what are the water requirements for fig trees? A general rule is 1 to 1 ½ inches (2.5-4 cm.) of water per week either form rainfall or irrigation. The tree will let you know if it needs to be watered by the yellowing of its foliage and dropping of leaves. Don’t put off irrigating fig trees until they become symptomatic. This will only stress the trees and put you at risk for a smaller or less superior crop.

If you’re unsure about fig tree watering, dig into the soil with your fingers; if the soil is dry near the surface, it’s time to water the tree.

The best way to water a fig tree is to allow the hose to run slowly or position a dripline or soaker hose at a distance from the trunk. Tree roots usually grow wider than the canopy, so position your irrigation to water a circle of ground that extends beyond the crown of the fig.

The amount and frequency of watering depends on the amount of rainfall, temperatures, and tree size. During hot, rainless periods, a fig may need to be watered once a week or more. Water deeply at least once a month in the summer to rinse away salt deposits as well as to get water to deep roots.

Fig trees grown in containers will generally need to be watered more often, especially when outdoor temps climb above 85 degrees F. (29 C.). This may include daily irrigation, but again, feel the soil beforehand to gauge whether or not watering is necessary.

Figs don’t like wet feet, so don’t water too often. Allow the tree to dry a bit between watering. Remember to water slowly and deeply; just don’t overwater. Every ten days to two weeks is sufficient. In the fall, as the tree enters its dormant season, cut back on the watering.