Cutting Back Gooseberry Bushes – How And When To Prune Gooseberries 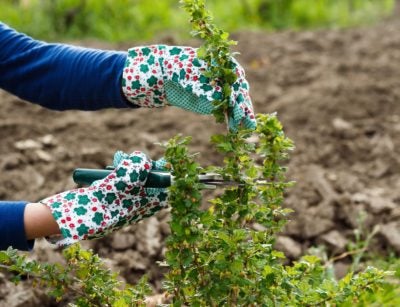 Gooseberry bushes are grown for their small, tart berries excellent in pies and jellies. With arching branches, gooseberries grow to around 3-5 feet high and across and do well in cooler climates hardy to USDA zone 3. They can become tangled and unhealthy without pruning gooseberry plants. The question is how to prune a gooseberry bush. Read on to find out when to prune gooseberries and other information about gooseberry pruning.

As mentioned, gooseberries can become a tangled mess and susceptible to diseases if allowed to grow unchecked. So cutting back gooseberry bushes is a worthy practice. The goal of cutting back gooseberry bushes is to keep the center of the plant open to air and sunshine, prune out any dead or diseased branches and to shorten the growth of the plant to a manageable size and to facilitate harvest.

When to Prune Gooseberries

Gooseberries bear fruit on 2- to 3-year-old branches. When pruning, a good rule of thumb is to keep a ratio fruit bearing limbs by leaving 2-4 shoots each of 1-, 2- and 3-year-old wood. Also, prune out any shoots that are older than 3 years of age. The best time to prune gooseberries is in late winter or early in the spring when the plants are still dormant.

How to Prune a Gooseberry Bush

Before pruning gooseberries, wear some thick leather gloves and sterilize your pruning shears with rubbing alcohol.

Prune out any dead or damaged branches on 1-, 2- or 3-year limbs. Prune the branches out to ground level in the early spring.

Prune 4-year-old or older gooseberries in early spring, cutting out the weakest and oldest limbs, again, down to ground level. Leave 9-12 stems per bush or cut out all the limbs to ground level, which will encourage the plant to produce larger fruit.

If the plant becomes infected with powdery mildew, cut out any stems that appear infected during the growing season. Prune three inches below the infected area, making your cut just above a leaf node. Sterilize the pruning shears before making any further cuts.

Printer Friendly Version
Read more about Gooseberries
<PreviousNext>
Did you find this helpful? Share it with your friends!
FacebookTweetPinEmail
Related Articles
Newest Articles
You might also like…
Additional Help & Information