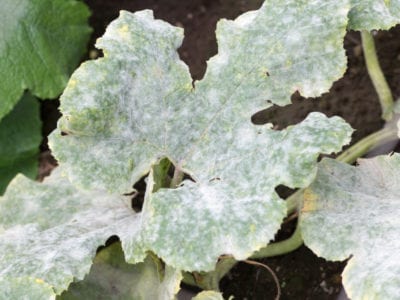 Powdery mildew is a common problem in areas that have high humidity. It can affect almost any type of plant; appearing on leaves, flowers, fruits, and vegetables. A white or gray powder coats the surface of the plant. If left untreated, it can turn more severe, causing leaves to turn yellow or brown. Many people look to a homemade cure for powdery mildew before turning to fungicides. However, finding a powdery mildew homemade preventer is preferable.

The best way to take care of powdery mildew is by prevention. Be sure to start with healthy plants. One powdery mildew homemade prevention tactic is to simply prune back any dead plant material during the normal pruning time. Do not plant things too close together in order to allow ample air circulation around the plants.

It is important to not plant in damp, shady areas, as that is a prime location for powdery mildew. Another powdery mildew homemade prevention tactic is to avoid using the sprinklers in the evening, so the water doesn’t stand on the leaves too long. The water itself doesn’t cause more mildew, but it allows it to be transported to the other leaves on the plant easier.

When prevention fails, it is a good idea to try organic removal of powdery mildew first. If you have a case of powdery mildew, be sure not to compost the infected plant parts. There are a few options to try when trying a homemade cure for powdery mildew.

There are even some plants, such as the lilac, that can have the powdery mildew on it and it doesn’t hurt the plant that much. So using a homemade cure for powdery mildew on the hardier plants isn’t necessary.

Another thing to remember is that if one type of plant gets it, that particular strain of powdery mildew won’t transfer to the other types of plants. For example, it won’t go from the roses to the lilacs, just to the other roses.

The best powdery mildew homemade prevention tactic is to maintain the proper moisture level, without raising the humidity around the plants too high. This, along with careful annual pruning, will go a long way toward keeping your plants healthy and beautiful.