No Fruit On Kiwi Vine: How To Get Kiwi Fruit 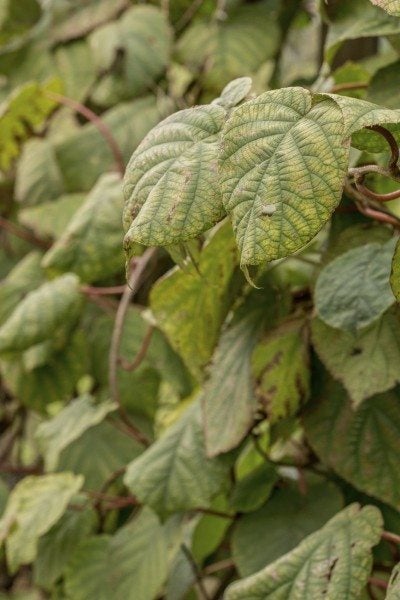 If you have ever eaten a kiwi, you know Mother Nature was in a fantastic mood. The flavor is a rainbow mix of pear, strawberry, and banana with a bit of mint thrown in. Ardent admirers of the fruit grow their own, but not without some difficulties. One of the major complaints when growing your own is a kiwi plant not producing. How then, can you get kiwi to fruit? Read on to learn more about non-fruiting kiwis.

Reasons for No Fruit on Kiwi Vine

There may be several reasons why a kiwi vine is not fruiting. The first thing to discuss is the type of kiwi planted relative to the climate.

Kiwi fruit grows wild in southwestern China and was introduced to the United Kingdom, Europe, the United States, and New Zealand in the early 1900’s. New Zealand has since become a major producer and exporter; hence the term “kiwi” is sometimes used in reference to its people. The kiwi grown in New Zealand and that you purchase at the grocers is a less cold hardy variety with egg-sized, fuzzy fruit (Actinidia chinensis).

There is also a hardy kiwi with smaller fruit (Actinidia arguta and Actinidia kolomikta) which has been known to tolerate temperatures down to -25 degrees F. (-31 C.). While A. arguta is cold hardy, both may be affected by extreme cold. Spring cold snaps can damage or kill the tender new shoots, thus resulting in a kiwi plant that is not producing. Successful kiwi production requires about 220 frost-free days.

Young plants should be protected from trunk injury during cold periods. The trunk hardens as it ages and develops a thick, protective bark layer, but the juvenile vines need assistance. Lay the plants on the ground and cover them with leaves, wrap the trunks, or use sprinklers and heaters to protect the vine from frost.

The second major reason for no fruit production on a kiwi vine may be due to the fact that it is dioecious. That is, kiwi vines need each other. Kiwis bear either male or female flowers but not both, so obviously you need a male plant to produce fruit. Actually, the male can satisfy up to six females. Some nurseries have hermaphroditic plants available, but production from these has been lackluster. At any rate, perhaps the non-fruiting kiwi just needs a friend of the opposite sex.

Additionally, kiwi vines can live for 50 years or more, but it takes them a little time to begin producing. They may bear a few fruits in their third year and most certainly by their fourth, but it will take about eight years for a full crop.

To summarize about how to get kiwi fruit to produce: