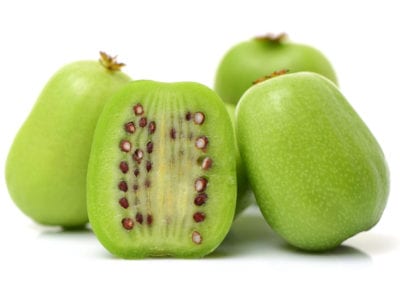 Do you love kiwi fruit? Do you avoid planting it at home because your climate’s too cool? Newer varieties have been developed that make growing hardy kiwi more feasible in chillier conditions.

Kiwi, known as “Chinese gooseberry,” has grown wild in Asia for centuries in warm climates. Hardy kiwi plants (Actinidia arguta) present a great opportunity for cooler zone gardeners though. Although different from traditional fuzzy kiwi in size and characteristics, they are equally delicious and packed with nutrition.

When you’re growing hardy kiwi plants it’s important to know about their basic needs and how to care for them. To become productive hardy kiwi vines, whether in gardens or pots, must be planted with at least one male for every six females. It’s a commitment—as they often take several years to mature and hardy plants may not bear fruit until they’re five to nine years old.

Plan ahead. Growing hardy kiwi vines requires extensive space. They can grow over 20 feet (6 m.) tall and should be planted about 10 to 18 feet (3-5 m.) apart. Since hardy kiwis are vigorous growers, it’s important to provide some strong trellising to support them, both vertically and horizontally. They need sturdy vertical support for the trunk and wood or wire support for side branches.

If you’re putting a few hardy kiwi vines in the garden, plant dormant, rooted cuttings in spring when the soil can be worked. If you’re planting them in pots, wait until all danger of frost has passed. Kiwi roots need to be covered well with plenty of loamy soil that drains well. Your soil should have a neutral to slightly acidic pH level (5-7). Don’t forget to plant at least one male for every few females. Feel free to mulch around the young plants.

Although a hardy kiwi can withstand cooler climates, even down to 32 degrees F. (0 C.), you’ll still want to protect it from a hard freeze by wrapping the trunk with landscape fabric or frost blankets.

Dormant season pruning will help your hardy kiwis stay healthy. However, hardy kiwi growing in the first year requires consistent pruning to train the plant to grow straight and upward. Unlike many other plants, your hardy kiwi vines will also need frequent pruning throughout the summer. The terminal growth needs to be cut back to four to six leaves beyond the last flower. Also, any shoots that may appear on the older wood and trunk, as well as any entangled shoots, should be removed in the summer.

Hardy kiwi can be susceptible to certain forms of blight and rot diseases, as well as root knot nematodes. Pests that enjoy munching on kiwi are spider mites, leafrollers, thrips, and Japanese beetles.

Be sure to avoid overwatering your plants. Kiwi plants don’t like wet feet. Keep dust levels low around the plants and encourage beneficial insects like lacewing or assassin bugs.

Unlike the brown fuzzy variety in the grocery store, the fruits of hardy kiwi plants are smaller, like the size of a large grape, and sometimes turn a rosy hue. They have tender, edible skin, are full of Vitamin C, and are highly aromatic.

Printer Friendly Version
Read more about Kiwi Plants
Next>
Did you find this helpful? Share it with your friends!
FacebookTweetPinEmail
Related Articles
Newest Articles
You might also like…
Additional Help & Information