Nectarine Fruit Oozing: What To Do For Sap Oozing In Nectarines 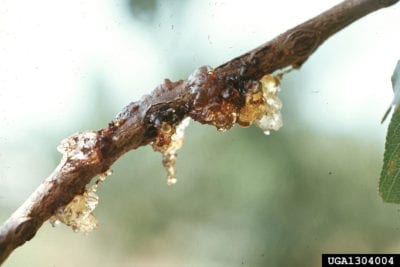 In many parts of the country, it’s not summer until peaches and nectarines start to ripen on local fruit trees. These tart, sweet fruits are loved by growers for their orange flesh and their honey-like fragrance, capable of overpowering all the other produce smells at the market. But what if your fruits aren’t perfect, or worse, your nectarines are oozing from their trunks, stems or fruits? Read more to learn about oozing nectarines.

Why a Nectarine Tree Oozes

Nectarine fruit oozing is caused by a couple of major offenders — primarily environmental problems and insect pests. Sometimes, oozing nectarines aren’t cause for alarm, since it can be a natural part of the ripening process, but it can also be a sign that the tree isn’t getting adequate care.

Improper care – Be sure to provide your fruiting nectarine with plenty of water during dry periods, adding mulch when necessary to help even the moisture levels out.

A 10-10-10 fertilizer should be broadcast in a 2-foot (60 cm.) circle around the tree, leaving 6 inches (15 cm.) around the trunk unfertilized, as blooms are opening in early spring.

Frost damage – Frost damage can cause nearly invisible cracks that cause sap oozing in nectarines as temperatures climb in the spring. There’s not much you can do about these cracks, except to provide your plant with excellent care and paint the trunks white in the fall, once cracks have healed. The lighter coloration protects against frost damage, though may not help much during a very hard freeze.

Canker-causing pathogens often enter through cracks in the bark and may develop after penetrating frost damage. A variety of fungi and bacteria invade the tree, causing thick sap to ooze from an often brown and wet-looking depression. Cankers can be pruned out, but you must be sure to cut at least six inches (15 cm.) into clean wood to prevent them from spreading further.

Fruit moths – Oriental fruit moth larvae burrow into fruits, often from the stem end, and feed around the pit of the fruit. As they break down tissues, excrement and rotting fruit may drip out of tunnel openings located on the underside of the fruits. Once they’re inside, your only option is to destroy infected nectarines.

The insect parasite Macrocentrus ancylivorus is a highly effective control for fruit moths and can prevent them from entering fruits. They’re attracted to large stands of sunflowers and may be held in the orchard year round with these plants, provided you don’t kill these beneficial insects with broad-spectrum pesticides.

Stink bugs – Stink bugs are less likely to surprise you with sudden damage of ripe fruits; they often begin attacking fruits while they’re green, leaving small, blue-green spots where they’ve been sucking sap. The flesh will turn corky as it matures or may be dimpled, and gum may ooze from feeding sites. Keep weeds mowed to discourage stink bugs and hand pick any bugs that you see.

Indoxacarb can be used against stink bugs and is relatively safe for beneficial insects.

Borers – Borers are drawn to trees that are already sick, especially when the problem creates openings in the tree’s bark. There are many different species of borers on nectarines, with peach borers most prevalent, but they’re all somewhat difficult to control because they spend much of their lives inside the tree.

When small holes are noticed in limbs, twigs, or branches, you may be able to save the tree by pruning them out. There’s no safe and effective control for borers that are already deeply ingrained in the trunk. Mating disrupters are used in some commercial settings, but won’t impact all borer species.