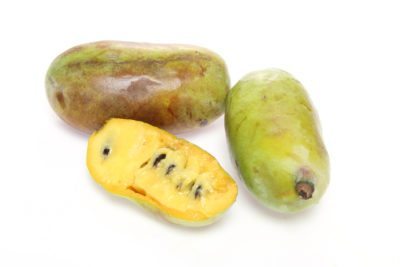 All types of pawpaw fruit trees require warm to hot summer weather, mild to cold winters and consistent rainfall throughout the year. They thrive in USDA zones 5 to 8 and can be found growing wild from south of New England, north of Florida, and as far west as Nebraska.

Pawpaw trees are on the small side for fruit trees, about 15 to 20 feet (5-6 m.) in height. Although naturally they have a bushy, suckering habit, they can be pruned and trained into a single trunk, pyramid-shaped tree.

Since the fruit is too soft and perishable for shipping, pawpaw is not commercially grown and marketed. Pawpaw trees have significant resistance to pests, as their leaves and twigs contain a natural pesticide. This natural pesticide also seems to deter browsing animals such as deer.

The flavor of pawpaw fruit is said to be like a blend of mango, pineapple, and banana-– a veritable potpourri of tropical fruit and is, in fact, often called the ‘banana of the north.’ While most people enjoy the flavor of pawpaw fruit, some apparently have an adverse reaction to ingesting it, resulting in stomach and intestinal pain.

Grafted pawpaw trees are usually two years old. Whichever you purchase, be aware that pawpaws need another pawpaw to fruit. Purchase at least two genetically different trees, meaning two different cultivars. Since pawpaws have a delicate tap root and root system that can be easily damaged when dug up, container grown trees have a higher success or survival rate than field dug trees.

There are now many cultivars of pawpaw to be had, each bred or selected for a particular characteristic. Some of the more common varieties include:

New varieties developed for the mid-Atlantic include Susquehanna, Rappahannock, and Shenandoah.

Most of the cultivars available have been selected from a wild cultivar, although some are hybrids. Examples of wild bred seedlings are the PA-Golden series, Potomac, and Overleese. Hybrids include IXL, Kirsten, and NC-1.