Growing A Flowering Peach Tree: Is An Ornamental Peach Edible 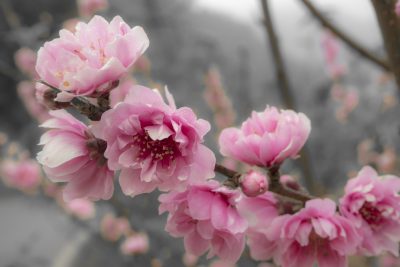 Ornamentals, in general, are included in the landscape for their flowers or colorful foliage. Although their purpose is ornamental, many of these trees will produce fruit. Some fruit from ornamentals is edible and quite tasty; crabapples and purple-leaved plums are such examples.

So, more than likely an ornamental peach tree will bear fruit but is an ornamental peach edible? Because the tree is developed for its ornamental characteristics and not the quality of its fruit, the fruit will likely be edible, in theory, meaning it won’t kill you, but inedible in practice since it probably won’t taste all that great.

Ornamental peach trees are sometimes referred to as non-fruiting or flowering fruit trees. The gorgeous blossoms bloom in the spring with clusters of single or double flowering peach petals. Single petal flowering peaches are more likely to bear fruit, but the flavor will not be equal to that of a peach tree grown exclusively for the quality of the fruit.

Ornamental peach trees are often of the dwarf variety and are bred not only for their luscious blooms, but also for a more diminutive size. As such, they make lovely container specimens to languish on a deck or patio.

Ornamental peaches need well-draining soil with a pH of 6.0-7.0 and full sun. They are susceptible to the same insect marauders and diseases as their peach-growing counterparts.

To plant an ornamental peach tree, dig a hole twice the size of the root ball and as deep as the container. Break up any clumpy soil and loosen the soil around the insides of the hole so the roots can take hold easier. Put the tree in the hole and spread the roots out. Backfill the hole with soil and then water the tree well.

Water the new tree twice a week if there is no rain and continue in this vein during the first growing season.

Ornamental peach tree care will also include feeding the tree and pruning it. Fertilize a newly planted tree a month and a half after planting with water-soluble 10-10-10 around the drip line of the tree. Thereafter, fertilize the ornamental peach twice a year, the first feeding in the spring once the buds are appearing and again in the fall.

Prune out any dead, broken, or diseased branches. If the tree appears to be diseased, be sure to sterilize your pruning shears by dipping them into alcohol or bleach. Prune out any suckers as well. Heavier pruning should only be done when the tree is dormant in the early spring prior to bud break. At this time, prune to remove any low-hanging, crowded, or crossing branches. Cut overly long branches to control the tree’s height.

During the growing season, use an insecticide/fungicide according to the manufacturer’s instructions to thwart pests and diseases.