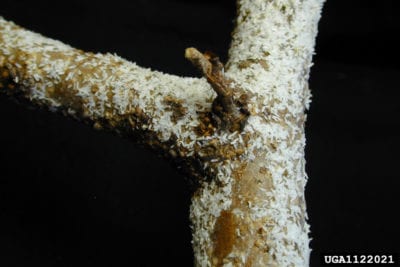 For home gardeners and commercial growers alike, catching and combating the problem in the early stages of infestation is recommended.

What is White Peach Scale

White peach scale insects (Pseudaulacaspis pentagona) are tiny armored bugs which consume sap and infest the bark, leaves, and fruit of trees such as peach, cherry and persimmon. These insects can inhabit over 100 species of plants and have worldwide distribution.

These insects are very small, with adult females averaging 3/64 to 3/32 of an inch (1 to 2.25 mm.). Mature females are white, cream, or grayish in color and can be identified by the yellow to red spot that gives these bugs the appearance of a fried egg. Adult females remain immobile, but young females spread to new areas before laying eggs. Fertilized females overwinter on the trees.

The adult male of the species is smaller than the female, orange in color, and only lives about 24 hours. Wings give the males the ability to fly and locate females via pheromones. Both male and female nymphs are smaller than the adult female. Depending upon the climate, more than one generation can be produced in a year.

Control of white peach scale is difficult due to the heavy armor which protects these bugs. The best time to apply oil is early spring when the first generation hatches and begins migrating. Monitoring this crawler stage can be accomplished by wrapping infested limbs with double-sided or electrical tape (sticky side out). Check the tape at least twice a week, using a magnifying glass to detect live bugs. Oil sprays are most effective against the immature insect pests.

Gardeners and commercial growers wishing to use chemicals for white peach scale treatment are advised to contact their local extension office for recommendations. Properly timed treatments are more effective and new products may be available.