Growing White Peaches: What Are Some White-Fleshed Peaches 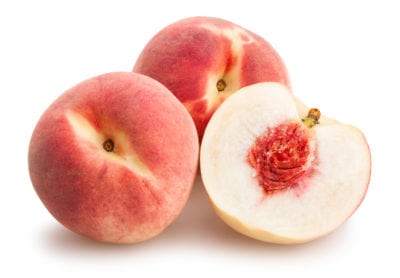 White peaches have low or sub-acid flesh as compared to the yellow varieties. The flesh may be pure white or even lightly blushed but has a sweeter taste than the traditional yellow. White fleshed peaches have lovely, floral notes that perfume fresh fruit salads or delightfully invade the nose during fresh eating. Check out some popular white peach varieties as you decide which one to add to your garden.

History of Peaches with White Flesh

For me, white peaches are the only peach. The delicate flavor and intense scent are a delight to the nose and palate. Peaches that are white tend to bruise more easily than the yellow but can be stored carefully for a short time. In most cases, they probably will be eaten so quickly it won’t matter. There are many varieties of white peach, each with different chill hour requirements and a variety of harvest dates.

White peaches weren’t always as popular as they are today. When they initially arose as sports, orchard owners would feed them to pigs or throw them away, as they were considered inferior to the desired yellow peaches. One of the heirlooms from that time that has survived is Stump of the Earth. Dating to 1825, this variety is still enjoyed today and in spite of its less than picturesque name, this early season peach is prized for its unusual flavor.

Other heirlooms are Polly White, from the 1920s, and Roddenberry, which has been grown in Florida for over 100 years. Step forward to the 1980s, where consumers began to demand a higher variety of fruits and enjoy the less acidic profile of the white fruit, and fruit trials developed dozens of new white fleshed varieties.

Among the white fleshed peaches are those that need as little as 500 to as much as 1,000 chill hours. Warm to temperate region gardeners should select those with the lower chill requirement. Some of these varieties have as little as 200 hours chilling requirement:

Among the varieties of peaches that are white are those suited for cooler regions. Most of these will be ready for harvest in June to early July. There are both round and ‘peento’ or saucer-shaped fruits available. Some excellent examples of these white varieties are: