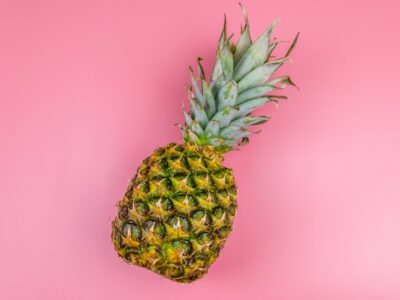 What is a pink pineapple? If you’ve never seen a Del Monte Pinkglow® pineapple, you’re in for a special treat. Unlike traditional pineapples, this trademarked variety has a luscious, pink-colored flesh. Pinkglow® is more than a novelty fruit though. It has health benefits not found in other pineapples.

If you’re wondering how a pineapple can have pink flesh, the answer is simple. Like other red or pink-fleshed fruits, the coloration comes from lycopene. This is the same pigment found in tomatoes, red peppers, and watermelon.

Pink pineapple fruit is an exciting innovation as lycopene has antioxidant properties. This pigment has been shown to reduce the risk of certain types of cancer and to slow the spread of cancer cells.

Like traditional pineapples, Pinkglow® is field-grown from vegetatively propagated plants. However, the pink-colored flesh is not the result of a naturally-occurring mutation. Pink pineapple fruit is a genetically modified organism, or GMO.

All pineapple fruit contains lycopene before reaching maturity. In traditional pineapples, the yellow-colored flesh is the result of a reduction of lycopene and an increase in the yellow pigment beta-carotene as the fruit nears maturity.

The Del Monte pink pineapple was created by altering the mechanism which controls the pigment produced at maturity. Genetic engineering of food is possible because the mechanism for reading the genetic code is the same in all organisms. Only the code itself differs.

Thus, scientists can take genes with positive attributes from one food and splice them into the DNA of plant species they wish to improve. These techniques can increase the nutritional value of food as well as lengthen its shelf life.

Regardless of the benefits, consumers have historically rejected GMO foods. This is based upon the belief that laboratory manipulation of DNA is unnatural, immoral, and unsafe. The FDA has found the Del Monte pink pineapple to be safe and has approved it for sale in the U.S.

As enticing as pink pineapples sound, it’s highly unlikely home gardeners will have the opportunity to grow this fruit in the near future. The odds of a naturally-occurring genetic mutation which would result in a pink pineapple plant popping up in the garden are extremely low.

Additionally, the costs associated with researching and developing new varieties of fruits, vegetables, and flowers are recouped by trademarking and licensing these new products. Del Monte has taken the following precautions to protect this investment:

Printer Friendly Version
Read more about Pineapples
<Previous
Did you find this helpful? Share it with your friends!
FacebookTweetPinEmail
Related Articles
Newest Articles
You might also like…
Additional Help & Information