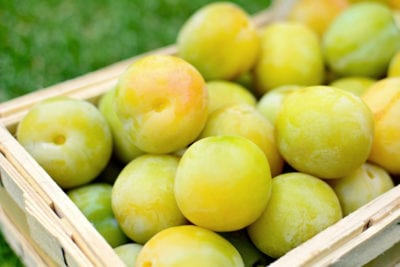 Gage plums, also known as greengage, are varieties of European plums that can be eaten fresh or canned. They can range in color from yellow and green to red and purple. The Early Transparent Gage plum is a yellow plum with a pretty red blush. It is a good choice for all types of eating and is an easy tree to grow as compared to similar cultivars.

This plum variety comes from England and dates back to the 19th century. All gage plums date back to an even earlier period in France, where they are called Reine Claude plums. As compared to other types of plums, gages are very juicy, which makes them exceptional for fresh eating.

Among the gage, Early Transparent is a variety with unique coloring. It is yellow to pale apricot with a blush of red that creeps over the fruits as they ripen. This variety is named “transparent” because the skin is very thin and delicate.

Like other gages, this one is delicious eaten fresh and raw, right off the tree. However, it is more versatile than other gage varieties, so if you want a plum you can eat fresh but also cook or bake with, can, or turn into jam, Early Transparent is a great choice.

Early Transparent Gage trees are easier to grow than other varieties. They produce more fruit and are less finicky. This is also a more compact tree and is self-fertile, so it makes a good option for smaller gardens where you have no room for a second plum tree for pollination.

Like other plum trees, this one will need full sun and well-draining soil that is adequately rich with organic material. There is some disease resistance in this variety, but it is important to look out for signs of disease or pests.

Keep the tree trimmed regularly to shape it and allow for airflow. It should be pruned once a year.

Water your tree throughout the initial growing season and then water only when there are drought conditions. You can also use a fertilizer once a year if your soil is not very rich.

Be prepared to harvest your plums in late summer, just when the tops of the fruits have begun to wrinkle slightly.