Plum Trees
By: Becca Badgett, Co-author of How to Grow an EMERGENCY Garden
Printer Friendly Version 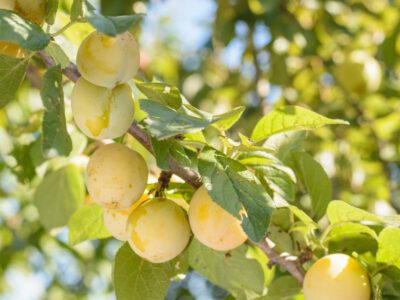 The difference between a plum and a gage plum is described as drinking the fruit rather than eating it. Seven or eight gage plums are known, with the French Oullins gage tree being the oldest. Prunus domestica ‘Oullins Gage’ produces scrumptious fruit, golden and large for the type. You may wonder what is an Oullins gage? It is a European type of plum, called a gage or green gage.

This tree was first documented in Oullins, for which it is named, near Lyon, France. Oullins gage information indicates that the European trees grow readily in the U.S. if you can find them. This specimen was first marketed in 1860.

The fruit is described as exquisite and ambrosial. It is ready for harvest in mid-August and is exceptional for eating fresh, culinary endeavors, and desserts. If you’re interested in growing Oullins gage plums, you’ll have your own exquisite gage fruit.

This specimen is most often grafted onto a St Julian rootstock. Care of the European gage is somewhat different than that of the Japanese plum.

Before planting, remove wild plums that may grow in your landscape. This helps avoid the spread of disease. Gage plums are susceptible to brown rot, a fungal disease that affects stone fruits. Plant your new Oullins gage in full sun and loamy, moist soil amended with compost. Don’t plant in a low-lying area where frost may settle. Plant so the graft union is an inch (2.5 cm.) above the soil.

Pruning is essential for all plum and gage trees and the Oullins is no exception. Like other fruit trees, prune this one to keep a single liter (1 qt.). Gages bear on one year old shoots as well as older spurs. They require less pruning than Japanese plums. When pruning, take off young shoots. Spurs and shoots with a heavy fruit set must be thinned to avoid breakage, however, a heavy fruit-set is unusual on this tree.

Gage trees actually take care of their own thinning by dropping fruit in spring. If this happens with your tree keep in mind it is a normal action. Follow the fruit drop by hand-thinning each fruit 3 to 4 inches (8-10 cm.) away from the next. This encourages larger fruits that taste even better.

Harvest the Oullins gage when some fruits are soft, generally in mid to late August. European gage fruits are best when allowed to ripen on the tree but may also be picked just as they’re turning soft. If you harvest this way, allow them to ripen in a cool place.